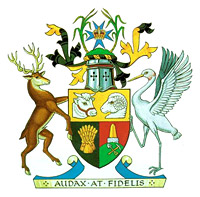 Queen Victoria granted the Queensland Coat of Arms, the oldest State Arms in Australia, to the Colony of Queensland in 1893.

The Coat of Arms symbolises the Queen's constitutional authority in the state. They were the first Arms assigned to a British colony since Charles II granted Jamaica its Arms in 1661.

As of August 2012, the Queensland Coat of Arms has been used as the government’s corporate logo.

Meaning behind the symbols

Primary industries take pride of place on the Coat of Arms, in line with economic trends in the nineteenth century.

Rural activities are represented by a sheaf of wheat, the heads of a bull and a ram, and by two stalks of sugar cane which surround the state badge at the top.

The prominence of mining is represented by a column of gold rising from a heap of quartz.

On the Coat of Arms is Queensland’s state motto, Audax at Fidelis, which means "Bold but Faithful".

In 1977, during the Queen's Silver Jubilee year, the Coat of Arms was given a more modern appearance when Queen Elizabeth II granted the supporting animals, the brolga and the red deer.

The brolga is one of Queensland's most distinctive birds and symbolises the native population. The red deer was introduced from the royal herds near London and represents the old world.

Using the Coat of Arms

The Queensland Coat of Arms is the formal identifier for the Queensland Government, as well as being used for ministerial and parliamentary purposes. It is not available for commercial use.