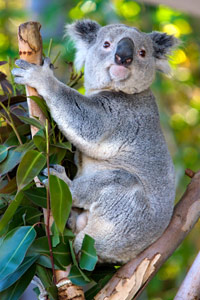 The koala was officially named the animal (faunal) emblem of Queensland in 1971, after a newspaper poll showed strong public support for this endearing marsupial.

The Queensland Government introduced the poll due to a proposal by state tourism ministers for all states to adopt a faunal emblem.

The koala (Phascolarctos cinereus) is commonly located throughout eastern areas of Queensland, south of Townsville, although it has been found as far north as Cooktown and as far west as Cunnamulla.

A popular and renowned icon, the species is known to be shy. However, colonies of koalas often thrive near built-up areas if there is sufficient bushland to provide a suitable habitat.

The koala is a marsupial – an animal that carries its young in a pouch. The newborn, less than two centimetres long, crawls through its mother's fur to her pouch, where it is harboured and suckled for about six months.

Normally a gentle creature, the koala spends almost all of its life in the tops of eucalyptus trees, usually dozing during the day and actively foraging for choice leaves at night.

As the species rarely drinks water, the name ‘koala’ originates from the Indigenous word meaning 'no drink', since it usually gains adequate moisture from dew and oily eucalyptus leaves.