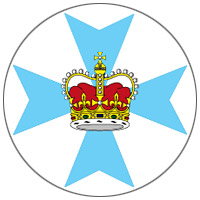 The badge of Queensland developed from the need to include a seal or badge in the design of the state flag.

The badge was adopted as part of the state flag on 29 November 1876. It is officially described as "On a Roundel Argent a Maltese Cross Azure surmounted with a Royal Crown". It was designed by William Hemmant, the then Queensland Colonial Secretary and Treasurer.

It is not known why this was chosen as a suitable badge. However, it is interesting to note that a Maltese Cross is the final stop on the legend band around the Great Seal of Queensland (1859). The Royal Crown also appears on this seal.

In 1893, the badge was incorporated into the Queensland Coat of Arms.

The Royal Crown has been altered slightly since the badge was first adopted under Queen Victoria's rule, as succeeding monarchs have preferred different interpretations of the Crown.

It was last altered in 1963, after Queen Elizabeth II decided to reproduce the Crown during her reign.

Like the Coat of Arms, the badge is not available for commercial use.