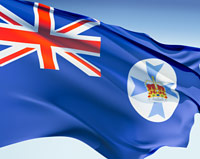 History of the State of Queensland  flag

The state flag was first introduced in 1876 when Queensland was a self-governing British colony with its own navy.

In 1865, the Governor of Queensland was informed by the Admiralty in London that the colony's vessels of war should fly the Blue Ensign (British flag), with the colony's badge on the stern, and a blue pennant at the masthead. Other vessels in the colony's service were to fly the same flag, but not the pennant.

At that time, Queensland did not have a badge. This prompted the submission to London of a proposed badge design.

In 1875, the Governor received drawings of the badges of several colonies from London, which the Admiralty proposed to include in the Admiralty Flag Book. The Governor was asked to certify that the badge shown for the colony of Queensland was correct.

The badge was composed of a representation of Queen Victoria's head, facing right, on a blue background and encircled by a white band, with the word Queensland at the top.

The Queensland Government believed it would be too difficult to adequately reproduce the head of the Queen on a flag. An alternative design, a Royal Crown superimposed on a Maltese Cross, was then submitted to London.

In 1876, the Governor was advised that the Admiralty had approved of the design and it was then that the present flag was established.

The Queensland Government offers free state flags to eligible organisations such as:

To request a free flag, contact your local State Member of Parliament.

For guidelines on flying the flag, download the following: