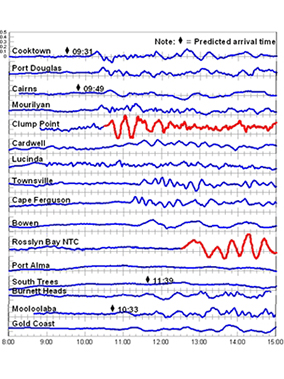 Information from Port Douglas and Gold Coast used with permission of Maritime Safety Queensland. Information from Rosslyn Bay courtesy of National Tidal centre (Bureau of Meteorology), copyright Commonwealth of Australia reproduced with permission.
Time series plots captured by storm tide gauges on 2 April 2007, showing sea-surface fluctuations that differ from the normal predicted tides as a result of a tsunami in the Solomon Islands.
View image in full screen

Queensland’s storm tide monitoring sites network plays an important role in providing data to indicate the magnitude of the waves along the coastline generated by these earthquakes.

They are generated during large ocean disturbances such as earthquakes, which propagate wave energy in all directions.

Once that wave energy reaches a coastline, the height of the water may increase even more, causing flooding and potential loss of life.

Tsunamis are particularly dangerous because:

The Joint Australian Tsunami Warning Centre, a 24-hour undertaking by the Bureau of Meteorology and Geoscience Australia, issues tsunami watch and warning bulletins when earthquakes are detected, indicating the expected level of threat to Australia.

Queensland’s storm tide gauges are able to measure the actual tsunami height along the coastline.

We have monitored such events as the: