One quarter of all Queenslanders live within 3km of the ocean. With more and more people choosing to live close to their favourite beach, it is important to know as much as possible about the natural forces affecting our coast and its communities.

In Queensland, the risk of severe storms increases during cyclone season (November to May). Our coastal scientists and engineers prepare for cyclone season by:

We also work closely with Bureau of Meteorology forecasters who predict the magnitude of storm surges generated by severe storms.

When a severe storm develops into a tropical cyclone, our coastal engineers and scientists:

Disaster managers use this data to adjust strategies in response to developing conditions.

Our agencies also use the Tropical Cyclone Storm Tide Warning—Response System Handbook (PDF, 3.73MB) as a guide for responses to severe storms off Queensland.

After major coastal hazard events like cyclones, our scientists travel to the impacted areas to:

The use of surveying equipment enables scientists to record beach profiles, the location of debris, and the heights of water markings on buildings.

Additional assessments can be made about the impact by observing the height of debris in trees and fences, and from discussions with local residents.

This information is used to verify the accuracy of predictions and improve future responses.

We also publish our findings in fact sheets and field investigation reports—see our publications page for access.

The 2011 Tropical Cyclone Yasi was one of the most powerful cyclones to have affected Queensland.

Previous cyclones of a comparable measured intensity include:

As Tropical Cyclone Yasi approached the Queensland coast on the morning of 3 February 2011, our engineers and scientists were providing 24hr support to the State Disaster Coordination Centre on storm surge levels and interpretive advice.

Our information and advice provided necessary insight to the decision making by disaster managers to evacuate threatened coastal communities. 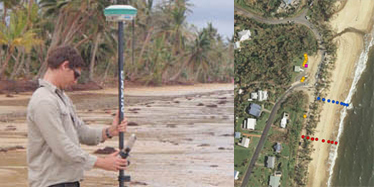 After Tropical Cyclone Yasi crossed the coast, our scientists began surveying the impacts along 230km of coastline in the worst-hit areas, from Townsville to Bramston Beach, south of Cairns.

Their post-cyclone field investigation report shows cyclonic winds on the ocean surface had a huge influence on the magnitude of damage.

Visit our publications page to see how you can access the cyclone Yasi fact sheet and post-event field investigation report.