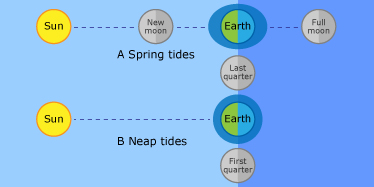 The physical alignment of the sun, moon and earth affect tidal patterns.

Refers to the periodic rise and fall of water along the coast due to gravitational interactions between the moon, sun and the earth.

When the moon, sun and earth are in line, their combined attraction is stronger and the tide range is greater (spring tides).

When the moon and sun are at right angles to each other (in relation to the earth), the effect of the attraction is somewhat reduced and the tide range is smaller (neap tides).

The standard time for Queensland, Australia, as defined by the Standard Time Act 1894.

AEST is based on the meridian 150 degrees east and is 10 hours earlier than universal time, which is expressed in relation to the 0 degree meridian at Greenwich, England.

The datum (adopted by the National Mapping Council of Australia) to which all vertical control for mapping is to be referred to.

The level of water to which all depths and drying heights on a chart are related.

It is a level so low that the tide will not frequently fall below it.

For Australian waters, chart datum is defined as the lowest astronomical tide.

The highest level of water that can be predicted to occur under average meteorological conditions and any combination of astronomical conditions. This level may not be reached every year.

When a storm tide level is higher than the highest astronomical tide it is more likely to cause inundation and flooding in coastal areas.

The term king tide has no scientific definition. In popular use, it refers to the highest tide (see astronomical tide) that occurs at a location per year.

King tides generally occur in summer. However, they sometimes also occur in winter.

The highest winter tides occur at night and are not as apparent as those during summer, which generally occur during the daylight hours.

The lowest tide level that can be predicted to occur under average meteorological conditions and any combination of astronomical conditions. This level may not be reached every year.

The value obtained at a site by averaging hourly tide heights observed over a long period of time (preferably 18.6 years). It is also the average water level that would exist in the absence of tides.

Tide predictions are typically based on actual tide readings gathered over 1 year or more.

The sun, moon and earth are not in the same relative position from year to year. Accordingly, the gravitational forces that generate the tides, and the tides themselves, are not the same each year.

The official tide predictions for Queensland ports are supplied by the Bureau of Meteorology, National Tidal Centre.

For some ports where a storm tide gauge is the only tide gauge, the storm tide data is used as the basis of the official tide predictions.

The difference between the predicted tide—under average weather conditions—and the actual tide height.

The residuals give a measure of height of storm surges during severe (cyclonic) weather conditions.

The components of the residuals are (see illustration under storm tide):

A standing oscillation in an enclosed or semi-enclosed body of water that continues after the end of the original force.

They can be triggered in an otherwise still body of water by strong winds, changes in atmospheric pressure, earthquakes, tsunami or tides.

The waves in a seiche are stationary in the horizontal plane and do not progress forward. The waves move up and down, but not forward like wind waves at sea.

An increase in water level associated with some significant meteorological event such as:

A storm surge is an abnormal rise of water level generated by a storm over and above the predicted tide level.

Storm surges are the combined effect of wind setup and wave setup, and falling barometric pressure. In some situations, when winds blow offshore, sea level can fall lower than the predicted tide level too.

The magnitude of the storm surge depends on the severity and duration of the event and the seabed topography at the site. In Queensland, most large surges are caused by tropical cyclones. 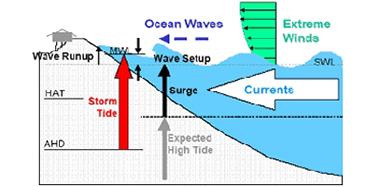 The components of a storm tide.

The combination of a storm surge and the normal astronomical tide.

If the storm surge arrives at the same time as the high tide, the potential risk of inundaton, flooding and erosion is greater than at a lower tide. An additional threat at this time could come from the presence of very high waves (wave run-up).

The inundation produced by a storm tide is often exacerbated by wave runup, waves overtopping natural or constructed levees and localised intense rainfall. This can lead to coincident flooding if combined with the effects of riverine (freshwater) flooding. The basic components of the typical storm tide gauge include a:

All instruments are battery-powered, with mains-powered charger recharging the battery during normal operation as a safeguard to ensure the system will keep up during severe weather.

A non-frontal low pressure system (below 1000hPa) rotating clockwise (in the southern hemisphere) that is of tropical origin and in which 10-minute mean wind speeds exceed gale force (63km/hr, 34kt or 17.5m/s).

A wave generated by seismic activity. It is also called a seismic sea wave, or incorrectly a tidal wave.

Barely visible in the open ocean, the amplitude of a tsunami may increase greatly as it approaches shallow coastal waters.

Tsunami waves travel in groups (wave trains) and often the largest wave occurs long after the arrival of the first wave. This is particularly evident within harbours and bays where seiching can increase the height of the tsunami wave.

Storm tide gauges along the Queensland coast have detected tsunami signals from seismic events in Central and South America, from Japan and Indonesia.

Read more about tsunamis and tsunami warnings at the Bureau of Meteorology website.

This is the rush of water up a beach after a wave reaches the shoreline.

The amount of wave run-up is the vertical distance between the maximum height the rush of water reaches on the beach and the still water level.

Wave run-up depends on many factors including wave height, wave period, and the slope and composition of the beach.

The vertical rise of a body of water above still water level, caused by wind stresses on the surface of the water.

Wind setup at the coast can force the sea level higher or lower than the predicted tide depending on the direction of the wind relative to the coast.

When the wind is blowing towards the coast (onshore), water will be piled up against the coast and raise the sea level.

When the wind is blowing offshore, water is pushed away from the coast and sea levels fall.