We maintain a network of storm tide monitoring sites along the Queensland coastline.

The storm tide network allows real-time access to sea level data during severe weather events so we can monitor the impacts of coastal inundation from storm surges.

The information collected during storm events helps improve forecasts and modelling of future events. It is of particular value during storm surges associated with tropical cyclones.

Our data is also useful for government when considering community evacuation.

How are storm tides monitored?

We use storm tide gauges to record the magnitude of storm tide events.

Fortunately these events happen infrequently, so for the majority of the time, the storm tide gauges act as normal tide gauges recording the regular rise and fall of the tides.

Data is stored every minute on a data logger for onsite storage. The data logger then automatically transfers the storm tide data over the internet to a central computer system (data server) in Brisbane for checking, processing and archiving. We then publish the data online—see our storm tide monitoring sites to view the data.

The indication of HAT is important because this level is not usually reached by the tide under normal meteorological conditions.

If HAT is exceeded, some inundation from the sea is likely to occur. The extent of flooding is influenced by local topography and by how much HAT is exceeded.

Emergency services and local governments use information from the storm tide gauges, together with maps of areas vulnerable to storm surges, to manage risk to the community.

The storm tide plot shown in the image was recorded during Tropical Cyclone Yasi in February 2011 at Cardwell, where a storm surge of approximately 5 metres occurred. 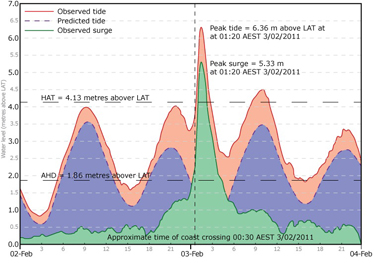 The storm tide recorded was above highest astronomical tide (HAT) and consequently there was potential threat from inundation.

The peak storm tide occurred between high and low tide as the tide was falling. Had the surge occurred at high tide, there would have been an additional 1 metre of tide, and further inundation.

This plot also shows there was additional risk to communities due to the high tide the following morning. After the storm surge, the measured level fell below HAT, only to exceed HAT shortly after, due to the influence of the next high tide.

This presented a risk to people who emerged from shelter too soon, thinking that the danger had passed. Fortunately this hazard was broadcast to communities and the risk was minimised.

We report on our storm tide data in a range of publications.

To access these publications, go to the library catalogue and search for:

Alternatively, search the library catalogue for the following publication titles: