Yarrabah community is located about a 60km drive south-east of Cairns. The township has a complex history, stemming from the early state administrations which forcibly relocated Aboriginal and some South Sea Islanders from many different groups to Yarrabah. Today, many in the community claim historical or traditional ownership to the area.

Yarrabah was established on the traditional lands of the Gunggandji people at Mission Bay on the Cape Grafton Peninsula, just south of Cairns[1]. Aboriginal people living on the eastern coast of Cape York had little contact with non-Indigenous people prior to the 1850s. Only a few brief encounters with British Royal Navy crews were documented[2].

Captain James Cook briefly anchored the Endeavour in Mission Bay in 1770 but his diaries suggest no direct contact with Gunggandji people. Rock paintings in the shire depict Cook’s visit from a Gunggandji perspective[3]. In 1851 Captain Phillip Parker King sailed the Mermaid between Cape Grafton and Fitzroy Island (located just to the south-east of Cape Grafton). King described seeing a group of Aboriginal people on the beach who ‘…arose and brandish’d their Wammarahs (Woomeras)’ in acknowledgement of the ship’[4].

Many beche-de-mer fishermen operated off the north-eastern Cape York coast after the 1850s[5]. One of the earliest to spend time in Gunggandji territory was J S V Mein, who claimed to be the first white man to explore the mainland from Cape Grafton to the foot of the Bellenden ranges. He claimed to have traded with Gunggandji people at Cape Grafton during his travels. Mein established a fishing camp at Green Island in 1857, but soon after moved on to Timor[6]. By the 1870s, several beche-de-mer fishing operations were based on Green and Fitzroy Islands[7].

Aboriginal and South Sea Islander labourers employed by beche-de-mer fishermen were subject to poor working conditions, and complaints about Aboriginal women being mistreated by the fishermen were common. Four fishermen were murdered at Green Island in 1873, allegedly by 2 Aboriginal employees angered by the fishermen's refusal to provide adequate rations[8]. An investigation into the murders brought the Native Police to Bessie Point, where they fired upon the Gunggandji who attempted to resist the incursion onto their land[9].

In 1873, the government employed George Dalrymple to lead a land-based exploration of Queensland’s north-east coast. Accompanied by the Native Police, the party explored the Mulgrave and Russell River areas, before travelling north to explore the Bellenden Ker Ranges, Fitzroy Island, Cape Grafton and Trinity Bay. From their camp at the future site of Mission Bay, they reported seeing many Gunggandji camp fires burning in the nearby hills. Dalrymple’s subsequent report to Parliament declared the ‘... the whole of the valuable agricultural coast country is free from vested interests injurious to its rapid development, and is now open to public selection’[10].

Cairns developed slowly until a track was established between the Hodgkinson gold fields and Trinity Bay. Land sales began in 1877 and a permanent Native Police barracks was erected[14]. Sugar farmers began moving to Cairns in the late 1870s, taking advantage of the favourable lease conditions offered specifically to that industry.

As the township grew, direct competition for land and resources intensified aggression between local Aboriginal groups and settlers. Many Yidindji and Djabugay people died during violent ‘dispersals’ by Native Police acting on the complaints of local settlers about ‘depredations by local blacks’. Several violent clashes involving Djabugay people occurred in the Barron River area, during the establishment of the road between Cairns and Thornborough. During a sweep of the Yungaburra district near Cairns in 1884, Yidindji people were killed at Skull Pocket, along the Mulgrave River and at Woree. One of the raiders later recalled, ‘(t)hey were easy running shots, close up. The Native Police rushed in with their scrub knives and killed off the children’[15]. For many years the Murray Prior Range, which separated Cape Grafton from Cairns, acted as a protective barrier for the Gunggandji people, who remained relatively isolated from the effects of frontier violence.

In 1889 F T Wimble, owner of the Cairns Post and local member of the Queensland Legislative Council, acknowledged the need to protect Aboriginal people from the violence of the settlers. He proposed that a reserve be set up in the Barron River Valley[16]. Among the missionaries who responded was Anglican priest John Gribble. He initially attempted to establish a mission at Bellenden-Ker in 1890 but was unable to gain government backing, partly due to the presence of other church missionaries in the area. Gribble was determined to succeed and relocated to Cape Grafton in 1892 to establish a mission which he called Bellenden-Ker mission. The Mission was established on 17 June 1892[17]. Gribble was forced to self-fund the mission until he attracted meagre financial support from the Anglican Church[18]. Gribble died within months of establishing the mission, and was replaced by his son, Ernest Gribble[19].

Before his death, John Gribble established contact with the Gunggandji and Yidindji people by visiting their numerous camps and performing baptisms. It was a senior Gunggandji man named Menmuny who initially encouraged a large group of his people to visit the mission for the first time in 1892. Menmuny had been previously baptised ‘John Barlow’ by Gribble in 1891. Menmuny was later made ‘king’ of the mission, and together with a group of tribal elders, enforced mission rules as the leader of a 12-member ‘General Aboriginal Council’[20].

During the early years Gribble was anxious to bring in Aboriginal children. He began by ‘recruiting’ children in the camps along the Cairns inlet. By 1899, he had secured a boat to cast a wider net along the Johnstone, Mulgrave and Barron Rivers and at Clump Point[21]. In this way many Wanjuru, Madjanydji and Tjapukai children were bought into the mission. By 1893, 40 Aboriginal people lived at the mission and its outstations, which had become known as ‘Yarraburra’, ‘Ngiyaaba’ and ‘Eyerreba’. Over time the term ‘Yarrabah’ was adopted, which was believed to be an Anglicised variation of a language name for the area where the mission was located[22].

It was common practice to house many, if not most children, in the dormitories at Yarrabah, from around the age of 10[23]. The mission was declared an Industrial School in 1900, making it an official destination for children charged as being ‘neglected’ under the Industrial and Reformatory Schools Act 1865. Other children were placed in the dormitories after being removed to the mission with their parents under the Aboriginals Protection and Restriction of the Sale of Opium Act 1897[24]. The steady stream of children contributed towards Yarrabah becoming the largest of all missions in Queensland by 1903[25].

The population increased further after more than 100 residents from the abandoned Anglican mission at Fraser Island, known as Bogimbah, were forcibly relocated to Yarrabah in 1904 at Gribble’s suggestion[26]. Many of the Fraser Islanders pined for their country and complained about the poor living conditions and inadequate housing at Yarrabah. A cyclone had almost completely destroyed the mission at Yarrabah in 1906, and not enough housing was available at the time of the Fraser Island arrivals.

Many escaped Yarrabah over the next few years, some of whom were returned by the police. Many of the ex-Fraser Islander residents were isolated at Fitzroy Island by the Mission Superintendent as a means to subdue the ‘malcontents’[27]. During a visit by Richard Howard (the Chief Protector of Aboriginals) in 1910, the Fraser Island residents presented him with a petition asking to be returned to their home and families. Subsequently, 40 Fraser Island people were removed from Yarrabah[28]. By April 1911 only around 10 ex-Fraser Island people remained at Yarrabah[29].

There were 969 recorded removals to Yarrabah from the establishment of the mission until 1972. When Norman Tindale visited Yarrabah in 1938 he found 43 different tribal groups represented there[30]. There were also 243 recorded removals from Yarrabah to places such as Palm Island, Mona Mona, Woorabinda, Cherbourg, Fraser Island and Hull River[31].

In the early 1900s, the church administration enlisted residents for employment in a variety of positions within the mission, for which they received no financial reward. All residents (including children) toiled in agricultural work to supply food. Cairns businesses also availed themselves of cheap labour from the mission by employing men and women under work agreements between the mission (on behalf of the Protector of Aborigines) and employers, as domestics and labourers in local industries, including coffee and sugar farming[32].

Between 1950 and 1960 there was persistent public criticism of the management of Yarrabah Mission. The Cairns Post reported constant problems and tensions at Yarrabah, and controversies over management of the mission. In the latter half of the 1950s, Yarrabah required a staff of about 15 people, and cost approximately ₤1,000 a week to maintain. The turnover of priests and staff was high[33].

In 1952 recruiting difficulties led the Anglican Church to adopt a policy of employing former military officers who had been recruited to the Anglican Church Army as mission superintendents. Their discipline, training, and commitment to evangelism and service led them to set high standards for themselves and to aim at a similar response in the people to whom they ministered. Many Yarrabah residents objected to the greater demands the Church Army officers made upon the labour force. In 1957, the Yarrabah residents staged a strike to protest against inadequate rations, poor working conditions, and the autocratic rule of the superintendent[34].

During the disturbance, several mission staff were assaulted, which led to many of the staff leaving the mission[35]. The superintendent, Captain Wilcox, with the support of the Queensland Government, expelled 3 men identified as the leaders of the strike. The incident was the culmination of a decade of internal and external dissatisfaction with the mission. Approximately 200 residents of Yarrabah, many of them supporters of the strike, were quickly given exemption from the ‘Protection Act’ and left the mission over the next 2 years[36].

By 1959, the Anglican Church was seeking to pass control to the state. Superintendent Wilcox stated that the ‘Church at Yarrabah is no longer running a mission but a large Social Service project beyond the financial and manpower resources of the Church’. On 1 July 1960, the Queensland Government officially took over control of the mission from the Anglican Church[37].

In 2005, the Yarrabah Aboriginal Shire Council came into being under the Local Government (Community Government Areas) Act 2004.

The residence of R W Gribble at Yarrabah in 1899. 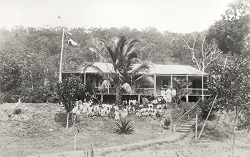