Mornington Island is located in the Gulf of Carpentaria, about 444km north of Mount Isa and 28km off the coast of mainland Australia. It has a unique natural environment which has been occupied by the Traditional Owners, the Lardil people, for many thousands of years[1]. Today, Mornington Island is renowned for its rich Indigenous culture, expressed most prominently through the Mornington Island dancers and the internationally acclaimed artwork that has emerged from the community in recent times.

Lardil, Kaiadilt and Yangkaal people had occasional contact with Macassan traders who visited the Gulf to collect beche-de-mer during the 1600s[4]. Contact with the British began when Matthew Flinders anchored the HMS Investigator off Sweers Island (South Wellesley) in 1802. Flinders named several islands at this time, including Mornington.  The British did not return until 1841, when Captain J Lort Stokes visited Bountiful, Fowler, Bentinck and Sweers Islands aboard the Beagle[6].

Contact with non-Indigenous people intensified after Burketown was established in 1865. The population of Burketown was relocated to Sweers Island in 1866 after an outbreak of ‘gulf fever’. The following year, the township of Carnarvon was established at Sweers Island, including a Customs House. This brought many people into the Wellesley Islands including Chinese and Pacific Island labourers[7].

Increased commercial activity in the Wellesley Islands impacted heavily on the traditional hunting practices of Indigenous people. Commercial fishing competed for sea resources and island ecosystems were devastated by the introduction of cattle, sheep, horses, rabbits and goats[8]. This competition for land and resources sometimes led to violence. In 1872, Customs Officers fired upon Kaiadilt people fishing at Sweers Island[9]. Kaiadilt oral histories also refer to the murder of 11 people at Bentinck Island in 1918 by a party of non-Indigenous people[10]. The abduction of Kaiadilt women and children was also relatively common throughout this period[11]. In 1867, armed Kaiadilt men were reported to have successfully retrieved two of their boys from local settlers at Sweers Island[12].

Despite the activity at Sweers and Bentinck Islands, few non-Indigenous people visited Mornington Island until the early 1900s, when commercial operators became interested in the Southern Gulf region[13]. Lardil people were increasingly exposed to the outside world, particularly men, who were recruited to work in the marine industries[14]. Employment on beche-de-mer and pearling boats was physically demanding and dangerous, and often exposed workers to abuse, alcohol and opium. In 1905, the government responded by declaring all islands in the Wellesley groups ‘Aboriginal reserves’ in an attempt to exclude labour recruiters from the Southern Gulf[15].

Government attempts to contact Lardil people were unsuccessful until 1908, when the Chief Protector of Aboriginals, R B Howard, visited Mornington Island and met a group of people who took him inland to show him a nearby lake[16]. After a second visit in 1912, Howard appealed to the government to establish a ‘protectionist presence’ on the island[17].

Two years later, the Presbyterian Church established a mission at Mornington Island with the assistance of the government. Founding missionary, Reverend Hall, arrived in May 1914, together with assistants, Paul and Walter Owen. Hall’s wife Katherine soon followed[18]. It was estimated that around 400 people lived on the island at this time[19].

Reverend Hall was killed by a Lardil man named Kidikur (also known as ‘Bad Peter’ and ‘Burketown Peter’) in October 1917. The highly publicised event led some to suggest missionaries had no place on the island. A 10 day siege followed Hall’s murder, during which time Hall’s wife and children were held captive. Kidikir was sentenced to life at St. Helena Prison in Moreton Bay, while six others involved were removed to the newly opened Palm Island settlement[21]. In 1918, the government appointed Reverend Robert Wilson as a permanent replacement[22].

Under Wilson, mission residents performed all the work necessary to develop and maintain the mission. Many men worked as stockmen, tending to cattle bought to the island to provide a food and revenue source[23]. Up until the 1930s, mission residents also sold sandalwood, beche-de-mer, dugong oil, turtle shell, fruit and vegetables to supplement the mission income[24].

By 1921, the use of dormitories to isolate children for education and Christian conversion was well established. The Sunday service provided one of the few opportunities for girls to spend time with their parents. Dormitory boys were released twice a week to see their families[25]. Discipline was strict and physical punishments were common during Wilson’s time. Children were segregated from the opposite sex and were locked into dormitories after evening meals. In addition to attending school and church services, the children were responsible for much of the agricultural and domestic work at the mission[26].

The mission was poorly funded and residents often experienced shortages of ‘white man’s food’[27]. Dormitory children often relied on bush foods brought to them by relatives, including dugong, turtle, oysters, fish, crab, goanna and wild honey[28]. The reliance on traditional foods was probably influential in Wilson's policy of releasing teenage boys from the dormitories to allow them to learn traditional hunting skills from their relatives. Girls often remained in the dormitories until they married or were sent into domestic service on the mainland[29].

The mission did not receive dedicated medical assistance until 1931. Health problems at the mission included hookworm, whooping cough, gastro-enteritis and mosquito borne illnesses[30]. An airstrip was completed on Denham Island in 1934 to assist missionaries to import food, medical services and supplies. Many mission men, women and children worked together for about a year to complete the airstrip[31].

The mission population grew rapidly at times. In 1936, 40 people were removed to Mornington Island from Turn Off Lagoon west of Burketown, many of whom were Waanyi people[32]. The new arrivals were met by a severe cyclone which destroyed almost all of the mission buildings that same year.

During World War Two, adult mission residents were encouraged to ‘go bush’ in preparation for a Japanese invasion. In 1942, almost all the mission staff and the children in the dormitory were evacuated to the mainland. The older children were put into domestic service at stations in the Gulf and the younger ones were sent to Doomadgee Mission[34]. Modern influences arrived when the Royal Australian Air Force established a radar station on the island in 1943. Concerts to entertain troops and locals were a regular event. Some mission men experienced a wage economy for the first time, after being sent to Burketown to work as stockmen to alleviate wartime labour shortages[35].

Mission staff returned to Mornington Island in 1944 without Reverend Wilson, who had been replaced by Reverend McCarthy. Unlike Wilson, McCarthy interfered with the rule of Elders in the camps surrounding the mission. He also introduced legal marriages, Aboriginal (Native) police and initiated the development of the first permanent housing in the community. He left the mission in 1948[36].

In 1947 and 1948, many Kaiadilt people were relocated to Mornington Island by the government after drought and a cyclonic tidal surge made living conditions on Bentinck Island very difficult. Some people had to be ‘induced’ to leave their home island[37].

More people arrived in 1958, when several Doomadgee mission families voluntarily relocated to Mornington Island to take advantage of the liberalised philosophies of the new Superintendent Reverend Belcher. Popular on the island, Belcher was referred to as ‘kantha’ (father)[38]. Belcher closed the dormitories in 1954[39], however he remained on in Mornington Island until 1970[40].

After World War Two, the Presbyterian missions were in serious debt[41]. With little money to develop the missions, living conditions deteriorated and sanitation became problematic at Mapoon and Mornington Island missions[42]. Periodic drought and water shortages compounded these problems and Mornington Island residents were regularly sent into the bush due to food shortages[43].

Media coverage of a gastro-enteritis outbreak at Mornington Island during the drought of 1952 drew national attention to the impoverished conditions at the mission. An evacuation of residents to Aurukun was narrowly avoided, after McCarthy supported residents who refused to leave without a guarantee they would be allowed to return when the drought broke[44]. The following year, 11 children died during an outbreak of dysentery on the island. Health workers went public, blaming poor sanitation, water quality and diet, and sub-standard housing[45]. By 1954, the government was pressuring the Presbyterian Church to close both the Mornington Island and Mapoon missions. The Mornington Island closure was abandoned, as a result of strong community protest and the discovery of a new source of drinking water[46].

Reverend Belcher introduced a cash economy into the community in 1954. Housing supplies, clothes and food items became available at the island store for the first time. Residents gradually replaced the bark and galvanized iron huts with prefabricated homes constructed by the residents themselves. Many residents took up work on the mainland as domestics, stockmen and fencers or worked on cargo boats. With Reverend Belcher’s encouragement, a cultural revival developed during the 1960s, which enabled several residents to become professional artists and dancers, the most notable being Dick Roughsey[47].

During the late 1960s and 1970s, the church introduced policies at Mornington Island and Aurukun missions which supported the communities’ aspirations to achieve self-management and recognition of Aboriginal land tenure. On Mornington Island, this was done through the creation of Gunanamanda Aboriginal Corporation. This placed the mission in direct conflict with the Queensland government, which threatened to assume administrative responsibility for the missions unless the church complied with official ‘assimilation’ polices[48]. The relationship broke down completely after the church began aggressively supporting the Aboriginal land rights protest which developed at Aurukun in 1975, after the government introduced legislation to facilitate bauxite mining there[49].

Cyclone Ted crossed the Mornington Island coast in December 1976 and destroyed almost all of the buildings and houses in the community[50]. Mission residents lived in tents for over a year whilst the Queensland government disputed the terms attached to disaster relief ($1 million) provided by the Australian government for rebuilding. The condition was that 30% of the money would be spent on ‘upgraded’ housing. The Queensland government wanted only 15% of the money to be spent in this way, and was actively refusing to rehouse some community members on the basis of a lack of employment prospects[51]. The relationship between the Australian and Queensland governments was particularly dysfunctional by this time, partly because of their conflicting policies in relation to Aboriginal land rights and self-determination[52].

After the Queensland government withdrew funding to the church in March 1978, and initiated an administrative take-over, the Australian government provided financial and political support to Aurukun and Mornington Island communities[53]. By this time, Prime Minister Malcolm Fraser was preparing legislation to facilitate self-management at Aurukun and Mornington Island missions after the communities requested his intervention[54].

Eventually the Queensland and Australian governments agreed to facilitate self-management through the creation of local government authorities at both Mornington Island and Aurukun communities.

The Mornington Island Shire Council was constituted with the introduction of the Local Government (Aboriginal Lands) Act 1978. A renewable 50-year lease to former reserve lands was issued to the council[55].

A barge unloading on new landing at Mornington Island in April 1972. 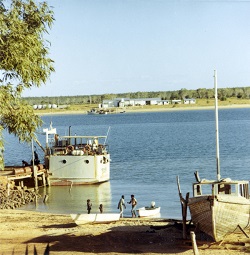