We acknowledge that the Queensland Indigenous Land and Sea Ranger Program exists due to the advocacy of First Nations people over many decades, and we pay our respects and gratitude to those individuals, communities, and organisations. We remain committed to partnerships that honour those who have come before us, and that build a future together.

Through the Queensland Indigenous Land and Sea Ranger Program, the Queensland Government partners with First Nations communities to care for land and sea country, provide jobs and training and engage future generations.

Funding for the first 54 of these positions has been allocated across 13 communities. The following organisations have been successful in their grant applications to employ rangers to care for Country.

Over the next 12 months the Queensland Government will work with these organisations to establish the new rangers, which will add to the 24 established Queensland Indigenous Land and Sea ranger groups.

A second round of grant funding, for further Indigenous Land and Sea ranger positions, is expected to be announced in 2022-23

Further information about the application and assessment process used in the most recent funding round is available in the Guidelines (PDF, 413 KB) . Rangers share knowledge at annual Indigenous Land and Sea ranger workshops (PDF, 5.5 MB) , at which ranger teams from across the state gather, hear stories of success, meet with partners and undertake local field trips to broaden their understanding of caring for country approaches.

The program works with ranger groups to diversify their income and attract other investors. Other investors are invited to partner in supporting this highly successful program and a partnership prospectus is available, highlighting the opportunities to sponsor Indigenous ranger groups. 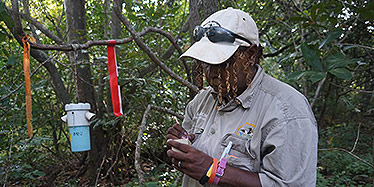 The success of Indigenous ranger programs in delivering outcomes for First Nations communities in environmental, social and economic terms has been confirmed through a variety of evaluations and other studies. These include a 2015 evaluation of the program which found that it is delivering on its conservation, First Nations participation and economic objectives.

For further information about the program, please contact the program office on (07) 3330 5553 or email LandandSea@des.qld.gov.au.

View the locations of Indigenous Land and Sea rangers.