Any pest represents a potential threat to a range of natural and cultural values on areas Queensland Parks and Wildlife Service manage. In some cases, even native species may be considered a pest, particularly if they were introduced to an island where their normal predators or control factors don’t exist. An example of this is the possums on North Keppel and grey kangaroos on Brampton islands.

Cooperation with commercial operators, such as island resorts, tour companies and barge operators, neighbours, other agencies and community groups is vital. Everyone needs to work together.

Natural processes and events can make pest issues worse or provide pathways (or vectors) for pests to spread more easily to the Great Barrier Reef (GBR) islands. For example, flood plumes—soils and flotsam (floating debris) washing out to sea after heavy rains—frequently act as a vector or medium for spreading pests. Cyclones can dump weed seeds, small pests can hideout in flotsam that will eventually wash up on the islands’ beaches, and migratory species can bring pests with them on their seasonal visits.

We are not able to control these events and so island biosecurity in these instances requires surveillance with follow up control measures if a new pest is discovered. We can control some factors, however, especially the unintentional or careless transfer of pests, and this is a major focus of island biosecurity on the Great Barrier Reef islands.

Pests such as invasive ants, mice, black rats, cane toads and weeds such as lantana, rubber vine and Mossman River grass are all potential travellers in materials being shipped or carried to islands. 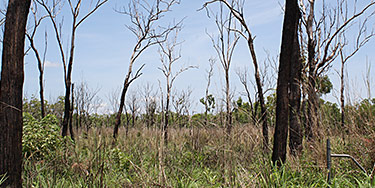 These pests compete with and often displace native species, once they have established. This threatens island biodiversity and significantly affects the natural, cultural and presentation values of these beautiful isles. For example:

Intense fires occur from the dense thickness and height of exotic grasses such as guinea and gamba grasses. Intense fires destroy native tree canopies, resulting in increased light and space for these grasses to spread even further.

Gamba grass has not yet been recorded on the Great Barrier Reef islands. Our diligence, as visitors, can stop this pest getting a free ride over there.

Get more information on invasive plants that threaten island biosecurity.

Two sides to isolation: the good and the bad

Island ecosystems are usually not as resilient as the mainland. They are ‘naïve’ ecosystems, meaning that historically, they were less exposed to pests due to their isolation, and therefore haven’t had to deal with impacts of pests. Isolation means the plant and animal communities that make up the islands’ ecosystems are not linked to supporting communities, which often bolster an ecosystem’s resilience against pests and diseases. But, isolation has played a part in keeping many GBR islands pest-free and healthy for a long time.

Isolation can make pest management more difficult. Some remote islands have access difficulties (beach landing constraints) for rangers, and often have difficult inland terrain and either poor, or no track networks. On the flip side, isolation can mean pests can’t move easily from island to island and can make eradication programs very successful.

These days, more and more visitors arrive on the GBR islands, sometimes with some accidental travelling companions. Weed seeds from the Australian mainland or even from further abroad can easily hide on or in a visitor’s baggage or clothes. Campers can easily transport pests in camping gear that hasn’t been cleaned out before they visit. Islands’ inherent lower diversity and connectivity and consequent lack of natural checks and balances can see pests left virtually unchecked for years. Once established, they can rapidly spread and can quickly destroy island ecosystems. Here’s an example:

Tryon Island, in the Capricornia Cays National Park once lost most of its pisonia forest in only seven years. This large, woody shrub or tree helps stabilise sand, offers breeding sites for seabirds and reduces the effects of cyclones on islands. There’s only about 190ha of this forest type in Australia and most of it grows on the Capricorn Cays, near Gladstone.

The culprit was a small (2mm long) introduced ant.

The African big-headed ant, also known as the coastal brown ant, farmed the honeydew excretions from a tiny scale insect on the leaves of the pisonia trees. In normal circumstances, scale insects get picked off by predatory insects such as lady bird beetles, which can die out particularly on small islands. Once the ants became established, they protected the scale insects—their major food source—from attack. Scale insects feed off the plant’s nutrients, and usually while pisonia can survive a mild scale infestation, a severe one will cause it to lose its vigour and its leaves. Without its leaves, pisonia cannot photosynthesise, and soon dies.

In an effective pest control operation, QPWS laid hundreds of ant baits near African big-headed ant nests and this, together with pisonia replanting, have resulted in the near full recovery of pisonia forest and apparent eradication of pest ants. Surveillance continues.

Further effective control operations on scale outbreaks in pisonia forests have included releasing native predatory ladybirds or parasitic wasps that may have died out or been reduced in numbers.

© A. McDougall
Near full recovery of Tryon Island’s pisonia forest, means an important seabird breeding area has been restored. Quarantine is the containment, removal or destruction of a pest before it reaches an island or spreads beyond its point of entry. However, containing pests is not the end of the story. Removing potential pests from their host materials and disposing or destroying them is vital.

Quarantine needs an understanding of the real and potential pathways of invasion and vectors for pests. ‘Pathways’ refer to the geographic routes by which a species moves from one location to another and ‘vectors’ are the physical means or agents by which species are transported.

Quarantine and surveillance measures need to be taken along entire pathways, aiming to prevent and restrict the introduction as far back along that pathway as possible.

Quarantine approach is the level of hygiene preparation needed to visit an island; different hygiene levels are required for different natural-value islands.

Surveillance is about checking that quarantine is being achieved, together with checking for new pests on the island that may have breached quarantine.

Anchor wells in smaller boats are very handy as rubbish bins. You’ll be surprised what can get in there and hitch a ride to an island. Make sure your anchor well, and other compartments, aren’t hiding pests, dirt and weed seeds.

Join in on the surveillance and be pest-free before your next visit to a Great Barrier Reef island.