Waves washing onto Flat Rock in the Moreton Bay Marine Park in Queensland.

Flat Rock, in Moreton Bay Marine Park, is one of the most popular dive sites in Queensland and is one of the four known areas where grey nurse sharks congregate. Field work at Flat Rock started in March 2018.

There are more than 10 commercial dive operators with access to Flat Rock. However, there are three operators that frequent the site with one other operator using the site during peak grey nurse shark aggregation periods. In addition, several other dive operators, plus a few dive clubs and several recreational vessels, visit the site. 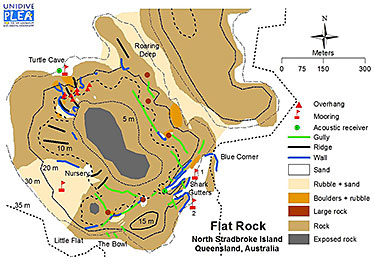 © University of Queensland with permission.

Divers have reported fewer than usual numbers of grey nurse sharks in the main shark gutter at Flat Rock during the peak aggregation period. They have suggested that the sharks are being disturbed and moving away from the normal congregation areas. This has not been scientifically confirmed.

Links to increased diver numbers and or presence are still unclear. The project team is currently investigating this behaviour at Flat Rock using the same reliable, scientific methodology as they used for the Wolf Rock site.

A joint research initiative between QPWS and Sea World.

Acoustic tagging is important to assist conservation and management of this critically endangered species.

Acoustic tags provide vital information about movements and residency of Grey Nurse Sharks for up to 10 years.

The project adheres to animal ethics standards and approvals and all care is taken to minimise distress to the sharks and return them swiftly to the ocean.

Dive in for more: www.des.qld.gov.au.