There have been periods of elevated particle levels in all areas of Queensland where monitoring takes place, largely due to dust storms and bushfires.

There have also been occasional breaches of the Air NEPM goal (<5 days per year) for particles less than 10 micrometres in diameter (PM10). Particularly during 2002, 2003, 2005 and 2009, the PM10 levels were above the standard of 50 microgram per cubic metre (μg/m3) due to major dust storms and/or bushfires.

In September 2009, a large dust storm (the Red Dawn dust storm) moved across eastern Australia, extending from the New South Wales–Victorian border to the Gulf of Carpentaria.

Fine, dry sediment from inland evaporation pans and floodplains in central Australia, deposited by the floods in February 2009 and whipped up by strong winds, associated with the passage of two weather fronts, became that extensive dust storm.

The following images show the impact of this dust storm on Brisbane’s air quality. Walton, P., 2009, Brisbane Dust Storm, Getting There…(2 steps forward, 1 back), Blog of Minister of the Centenary Uniting Church, Brisbane, Australia. https://terce.wordpress.com/2009/09/24/brisbane-dust-storm/
View from the Mount Coot-tha lookout, Brisbane during a dust storm on 23 September 2009 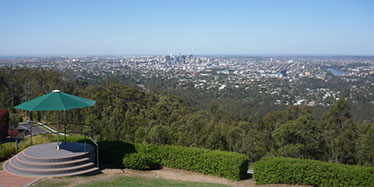 Walton, P., 2009, Brisbane Dust Storm, Getting There (2 steps forward, 1 back), Blog of Minister of the Centenary Uniting Church, Brisbane, Australia. https://terce.wordpress.com/2009/09/24/brisbane-dust-storm/
View from the Mount Coot-tha lookout, Brisbane, on 24 September 2009, the day after a dust storm

Fires are common in Australia and include:

Recent changes to management procedures has reduced the impact of smoke from vegetation fires—for example avoiding hazard-reduction burning when the smoke is likely to affect populated areas because of poor dispersion conditions. 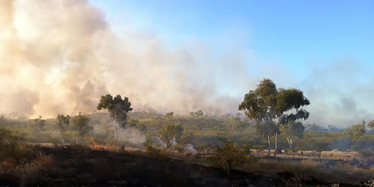 Queensland Fire and Rescue Service
A typical bushfire in Cloncurry on 27 August 2012.

The immediate impacts of dust storms and bushfires include:

The loss of soil from the source can also impact on water quality as soil is carried away into waterways and wetlands.

Bushfires also release large amounts of ozone precursors and carbon dioxide into the atmosphere and have the potential for widespread damage to property, environment and human life.

View the live air data service to check the current levels of particles in the atmosphere at monitoring stations in the Queensland network.

When you are aware that bushfires or dust storms are imminent, you can take some steps to reduce the impacts.

Where possible, stay indoors and minimise the transfer of outdoor air to the inside by closing windows and doors.

You should not exercise outdoors in a smoky atmosphere, as this will increase the amount of fine particles inhaled into the lungs.

This is particularly important for people with medical conditions who should prepare by taking their medication in consultation with their doctor.

Queensland Health has a telephone service for any health concerns that are not an emergency but could be serious: 13 HEALTH (13 43 25 84).

View the current air quality in Queensland with hourly updates from the statewide monitoring network.