The Richmond birdwing is one of Australia's largest butterflies, with a wingspan of up to 16cm in females and 13cm in males.

Males and females differ in appearance. Females have dark brown or black wings with extensive white, cream or, in the hindwing, yellowish markings. The upper forewing of males is black with a distinctive iridescent green leading edge, while the upper hindwing is predominantly iridescent green with black spots. The underside of the male's forewing is black with extensive green or blue-green markings, whereas the hindwing is largely blue, green and yellow with obvious black spots.

The larvae or caterpillars develop through five stages (instars), moulting their skins between each stage. The mature (fifth instar) larvae can grow up to 58 mm long and are variable in colour, ranging from black to pale grey-brown. Larvae have a series of prominent, fleshy spines running along their outer dorsal (back or upper) surface and a similar but shorter row of spines along the outer ventral (lower) surface. The chrysalis or pupa is bright green or bluish-green and measures 40mm in length. It bears a lateral projection and two small dorsal projections on the thorax.

The larvae are cannibalistic and usually solitary. Although only one larva is typically found on an individual food plant, higher larval densities may occur in some situations, e.g. on planted vines in backyards.

Eggs are roughly spherical, approximately 2mm in diameter and bright yellow or brownish-yellow. They are laid on the undersides of soft leaves of the food plant. 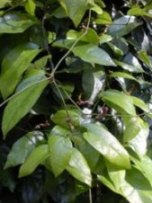 The Richmond birdwing butterfly mainly lives in subtropical rainforest where its larval host plants grow. Its distribution once extended from Maryborough in southern Queensland to Grafton in northern New South Wales. Today its distribution is fragmented, with the species occurring in two main areas: in the north, from Cootharaba on the Sunshine Coast to near Caboolture and in the south, from Ormeau and Mount Tamborine in the Gold Coast hinterland to Wardell in north-east New South Wales. The Richmond birdwing occasionally occurs in the greater Brisbane area but no breeding populations are currently established there.

The Richmond birdwing lays eggs singly or in small clusters (up to three) on native Pararistolochia vines – the birdwing butterfly vine P. praevenosa at low to moderate elevations, i.e. <600 m, and the mountain butterfly vine P. laheyana at higher elevations, i.e. above about 600 m). Larvae are entirely dependent upon one or other of these vines for food, only leaving the host plants to complete their development to pupal and then adult stages. The birdwing butterfly vine is only patchily distributed and in low abundance in its natural habitat.

Pararistolochia praevenosa is listed as Near Threatened under the Nature Conservation Act 1992, whereas P. laheyana is listed as Least Concern.

In 1870, the Richmond birdwing was reported as being abundant in the streets of Brisbane. Today, its rainforest habitat has been extensively cleared. with less than one per cent of the original area still in existence. Permanent populations of the Richmond birdwing no longer exist in the Brisbane area. Similarly, habitat loss and fragmentation has caused the butterfly’s distribution to shrink back from its former northern and southern extents. As remnant colonies become isolated, the resulting inbreeding leads to a variety of negative effects, which may include reduced reproductive output, the laying of sterile eggs, abnormal larval development, premature death, pupation failure, a reduction in size of adults and a loss of vigour, ultimately leading to local extinction. The impacts of habitat loss, fragmentation and inbreeding are likely to be exacerbated by climate change, which increases the severity and frequency of drought events. Lack of rainfall prevents the production of soft, new leaves by the host plants. Such fresh growth is a key requirement for young larvae to be able to feed since old birdwing butterfly vine leaves are extremely tough and unpalatable. 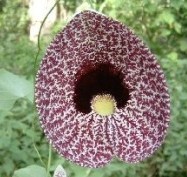 While Richmond birdwings naturally lay eggs on the two native host plant species, they are also attracted to lay on the introduced Dutchman's pipe Aristolochia elegans. However, the leaves of this invasive vine are toxic and kill the larvae when they are eaten. Unfortunately, Dutchman's pipe is common in gardens and as a weed in bushland, creating host plant confusion for egg-laying adult females and a 'death trap' for any larvae that hatch on its leaves.

In 2008, the department, along with the Richmond Birdwing Conservation Network (RBCN), an active community group operating under the umbrella of the Wildlife Preservation Society of Queensland, began a joint project to help conserve the species by employing a strategy of captive breeding and release of birdwings. Under the breeding program, Richmond birdwings from geographically separate sources have been mated with the aim of producing more genetically diverse offspring. These captive-reared progeny are then reintroduced at selected sites to help restore wild populations where declines are evident or local extinctions have occurred. Following the first releases in 2010, evidence of natural breeding by the butterfly and more than a dozen flying adults were seen in the Kin Kin and Cootharaba areas of the Sunshine Coast for the first time in almost two decades. Since the program was initiated, more than 500 Richmond birdwing individuals, mostly larvae and pupae, have been reintroduced across eleven sites in south-east Queensland.

This reintroduction program complements other enthusiastic efforts being made by the RBCN, local governments, Seqwater, conservation organisations, community groups and members of the general public to conserve the Richmond birdwing. These efforts include the reinstatement of corridors and stepping stones of the larval host plant P. praevenosa to link existing remnant habitat and isolated butterfly populations, the removal of Dutchman’s pipe, and mapping of the current distribution of the Richmond birdwing and the vines on which this spectacular butterfly’s survival depends. 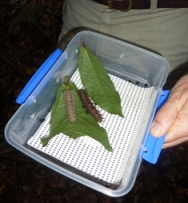 This reintroduction program complements other enthusiastic efforts being made by the RBCN, local governments, Seqwater, conservation organisations, community groups and members of the general public to conserve the Richmond birdwing. These efforts include the reinstatement of corridors and stepping stones of the larval host plant P. praevenosa to link existing remnant habitat and isolated butterfly populations, the removal of Dutchman’s pipe, and mapping of the current distribution of the Richmond birdwing and the vines on which this spectacular butterfly’s survival depends.

Orr A and Kitching R. 2010. The Butterflies of Australia. Allen and Unwin, Crows Nest.

Sands D. 2008. Conserving the Richmond Birdwing Butterfly over two decades: Where to next? Ecological Management & Restoration 9: 4-16.