Population boom for wombats across QLD

Recent population estimates have shown wombat populations are doing well. From humble beginnings of only 35 individuals in the 1980s, the immense amount of work in conserving this species has paid off with the population at Epping Forest National Park (Scientific) estimated to be exceeding 300 in 2021.  The translocated population at Richard Underwood Nature Refuge is also showing promising increases with seven joeys being born in the colony since 2016, when an additional male was introduced.

How do you catch a wombat? 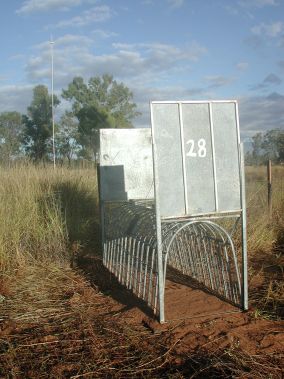 There is still much to learn on the ecology and biology of the northern hairy-nosed wombat. Monitoring this species of wombat is difficult due to their shy nature, use of burrows and nocturnal behaviour. Currently, management use a variety of monitoring techniques, including hair censuses, burrow monitoring, and live trapping.

Since 2019, we have been working on a project to improve the efficiency of trapping wombats, which has previously only been able to, on average, capture two wombats for every 100 traps deployed. 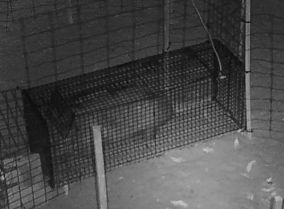 The first stage of this project was to redesign the type of trap used, which were previously heavy and large, making them difficult for staff to maneuverer and deploy directly into burrow entrances and around water stations. Extensive consultations between trap manufacturers and wombat experts were conducted on how to alter the design to:

2) improve work health and safety for staff, and

In 2020, several prototype designs were selected and trialled at Epping Forest National Park (Scientific). These tests were very successful with an increase in the number of wombats caught to over five times previously recorded levels.

As the northern hairy-nosed wombat recovery program looks forward to translocating more wombats and establishing additional populations, this progress is essential to ensure wombats can effectively and safely be trapped. The project will now examine different ways of monitoring traps in the field to further improve efficiencies and outcomes for the species.

A new male in town 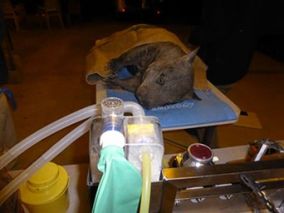 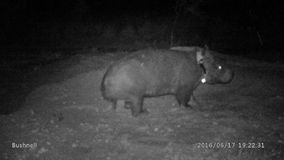 After several years of no evidence of reproduction at Richard Underwood Nature Refuge it was decided to translocate another male from Epping Forest National Park (Scientific). During the 2016 wombat trapping at Epping Forest National Park, department officers captured a healthy male of 31kg, who was transported and introduced to the colony at Richard Underwood Nature Refuge with the hope he will charm the females and re-ignite growth of the population.

The new wombat on the block certainly made his presence known in the community with GPS tracking and infra-red cameras showing him calmly and confidently exploring active burrows, interacting with other wombats and on numerous occasions sharing a burrow. He has been recorded visiting nine different burrows in one night. It was not long before camera footage indicated the new male’s efforts had been productive with a pouch young detected in late 2016 boosting the population to 11 individuals. 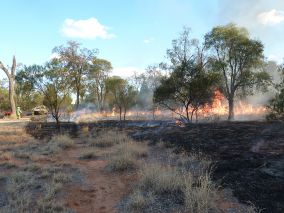 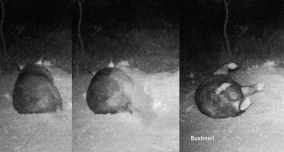 Interestingly, following an approved planned burn, physical evidence was found of wombats rolling in the ashes, which coincided with anecdotal reports. The reason behind this behaviour is unknown, however, experts have proposed it may soothe the wombat’s skin or potentially discourage parasites.

The ups and downs of refuge life

In early 2012 there was excitement over the discovery of a third pouch young at Richard Underwood Nature Refuge. But the excitement was not to last, as several months shy of the joeys expected emergence date, the mother exited her burrow without a pouch young. Conservation officers waited expectantly for a joey to emerge from the burrow, but after several weeks the mother moved on from her burrow, indicating that there was no longer a joey.

There was also the unfortunate loss of two adult males in the latter half of the year. These wombats died of causes indirectly related to aggressive encounters with each other.  While these deaths are significant to the small population, they are a reality of nature and provide conservation officers with new information that potentially assists with the future management of this species.

As the dust settles, wombats are born

In March 2011, the first birth within the new population at Richard Underwood Nature Refuge was confirmed. This was followed by news in April 2011 of a second female carrying a pouch young. 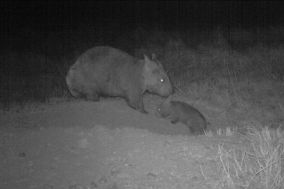 After nine months in the pouch, the joeys were left in the burrow for several weeks, whilst the mother foraged close by. In October 2011, the first joey was captured on video emerging from the burrow following its mother. This was the first time that the first emergence of a northern hairy-nosed joey had been captured on film.

After their translocation in 2009, infra-red camera monitoring of the wombats at Richard Underwood Nature Refuge found them predominantly displaying typical wombat behaviour of digging and foraging. It was expected the wombats, who typically show little interaction, would have greater contact with other wombats after being release, as they explored their new area and established social boundaries. Infra-red camera monitoring confirmed this; however, the largest male was regularly seen displaying a higher level of aggression than expected towards other males. Unfortunately, two male wombats were found deceased on the property shortly after their release. Autopsies were conducted on the deceased wombats, but the results were inconclusive, though it appeared both had died rapidly. Luckily, the three remaining wombats appeared to be thriving in their new home and the decision was made to continue with the planned increase in population from Epping Forest National Park (Scientific).

In 2010, trapping at Epping Forest National Park resulted in the capture of 10, two males and eight females, wombats suitable for translocation to Richard Underwood Nature Refuge. These wombats were transported to the new site the next day and released to join the five wombats released the previous year. This addition to the population at Richard Underwood Nature Refuge meant the initial translocation was complete with 15 wombats, six males and nine females now resident.

Glencore, a global mining and commodities company, has sponsored the northern hairy-nosed wombat reintroduction project as part of their Community Partnership Program which supports initiatives in the areas of health, education, environment, arts and culture, social and community development, and enterprise and job creation. 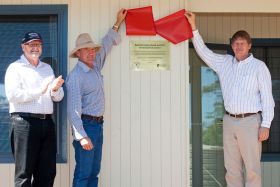 Glencore’s generous sponsorship of the northern hairy-nosed wombat reintroduction project was acknowledged at the Third Sustainable Industries Awards on 31 October 2008. On 13 April 2011, to celebrate the successful partnership between the Queensland Government, Glencore, and the landowners a plaque commemorating the completion of the first three years in partnership was unveiled. 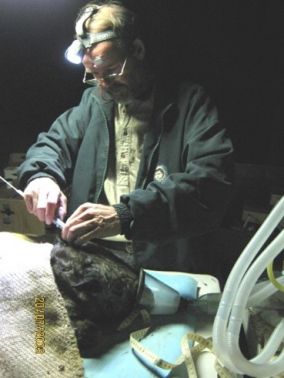 The first wombat was caught around 8pm on 20 July 2009. He was a sub-adult male, weighing 25.4kg, who, after a thorough vet examination, was deemed suitable for translocation. In the early hours of the next morning, he boarded a charter flight to St George and become the first northern hairy-nosed wombat to fly. After landing, he was transported to Richard Underwood Nature Refuge and within 10 minutes of arrival, he was released into a man-made (starter) burrow.

Over the days that followed, a total of five wombats were trapped, transported, and successfully reintroduced to Richard Underwood Nature Refuge.

The condition and location of the newly reintroduced colony of wombats at Richard Underwood Nature Refuge was monitored daily, using infrared cameras and VHF transmitter collars. Volunteers and staff were kept busy searching around burrows and water stations for prints and recording new burrows which were quickly dug out by the wombats.