It is thought that the northern hairy-nosed wombat was likely in decline when Europeans settled in Australia, at that time it was probably the least common of all wombat species. Records confirm the species occurred at three known locations, including the Riverina area in southern New South Wales, the Moonie River area in southern Queensland, and the Epping Forest area in central Queensland.

Since Europeans settled Australia, the main reasons for the species rapid decline include:

By the early 1980s, the northern hairy-nosed wombats in Epping Forest area of central Queensland were the last remaining population. Alarmingly, the population consisted of only 35 wombats, sparking an intensive research and recovery effort.

As the threats to northern hairy-nosed wombats are better understood, management actions continue to be developed and implemented to mitigate threatening processes. Since 2001, significant increases in wombat numbers have indicated recovery efforts are working. Regardless, ongoing work is needed to ensure the species continues to recover, to reduce the impact of existing threats and to identify and address potential new threats.

In recognition of this ongoing requirement, on 15 February 2018, the federal Department of Agriculture, Water and the Environment (DAWE) upgraded the conservation status of the northern hairy-nosed wombat from Endangered to Critically Endangered under the Environment Protection and Biodiversity Conservation Act 1999. In 2021, the status of northern hairy-nosed wombats under the Queensland Nature Conservation Act 1992 also changed to Critically Endangered. These changes occurred as part of a process to align the categories for threatened species in Australia with those used by the International Union for Conservation of Nature’s Red List of Threatened Species.

Epping Forest National Park (Scientific) extends over 2,750 hectares the vegetation within the park is classified as open eucalypt woodland. Importantly, the park supports a healthy grass layer that provides food for wombats, and extensive areas of suitable burrowing soils that are characterised by deep sandy-loamy soils.

The park is the location for most of the world's population of northern hairy-nosed wombats. The last census, in 2016, estimated the population to be 245, made up of approximately 50% males and 50% females. 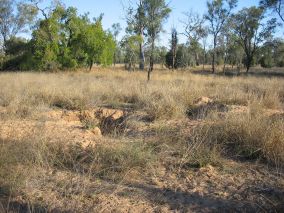 It is unclear why the northern hairy-nosed wombat only persisted in the Epping Forest area, but it is likely that the mindful management by the Dennis family (who managed the land before it was gazetted as a national park) was a contributing factor.

The department undertakes a variety of research and management activities at the park to help protect and grow the northern hairy-nosed wombat population. The Epping population plays an essential role in wombat conservation, not only as the largest population, but also as the source for establishing new populations at alternative locations, such as Richard Underwood Nature Refuge. 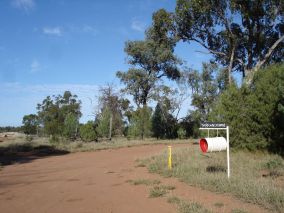 Due to the risk of the sole population of northern hairy-nosed wombats at the park experiencing a potential catastrophic event, including a major wildfire, flood, disease, and predation, a decision was made to establish a second population.

After extensive searching across the historic range of northern hairy-nosed wombats in Queensland, a suitable site was found on the property Yarran Downs. The owners, Ed and Gabriele Underwood entered into a Nature Refuge Agreement to create Richard Underwood Nature Refuge on part of their property to provide an area where wombats could be reintroduced. In addition, an Authority to Prospect on adjacent land was voluntarily amended by the holders, Bow Energy, to preclude prospecting activities, enabling further expansion of the nature refuge boundary. The nature refuge was gazetted on the 27 November 2008 and protects about 130 hectares of eucalypt woodland on old river levees.

Across 2009 and 2010, 15 wombats were translocated to the Nature Refuge, resulting in the successful establishment of a small second colony. Since its establishment, the colony was supplemented with an additional male from Epping Forest National Park (Scientific) in 2016 and has recorded numerous successful breeding events.

A major threat to the northern hairy-nosed wombat's survival is its low population size. Small or isolated populations are more susceptible than larger populations to local catastrophes (i.e., flood, fire, or disease), loss of genetic diversity and inbreeding.

Previous records have shown predation by wild dogs is a considerable threat to the northern hairy-nosed wombat.

Northern hairy-nosed wombat’s main competitor for food, across its current range, is the eastern grey kangaroo.

Diseases such as toxoplasmosis (found in cat faeces) or mange, are potential threats to the wombats.

Floods are a potential threat to populations of northern hairy-nosed wombats, due to their ability to inundate burrow systems and destroy food resources.

In January 2008, Epping Forest National Park (Scientific) was isolated by floodwaters that covered most of central Queensland. The Belyando River, which normally flows some 10km to the west of the park, experienced considerable flooding. At the flood's peak, the park was in the middle of a vast inland sea, with water from the river flowing through the western boundary and wrapping around the park. Anxious departmental officers conducted a helicopter inspection during and after the flood. Fortunately, most of the wombat burrows appeared to be on elevated ground, above the water level. 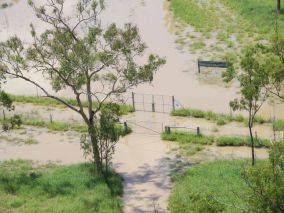 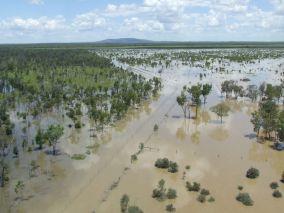 Drought, such as the six-year long drought in the 1990s, slows the reproductive output of northern hairy-nosed wombats, and reduces body condition and survival rates in the population. A study by Crossman et al. (1994) found 50-75% of breeding females successfully bred when good summer rainfall occurred, whilst only 20% bred during a major drought.

Wildfire is not a direct threat to individual northern hairy-nosed wombats as deep burrows provide protection. However, fire will destroy food resources and may impact particular tree species whose roots provide stability in wombat burrows.

The habitat at Epping Forest National Park (Scientific) and Richard Underwood Nature Refuge is well protected. However, loss of habitat more broadly, through tree clearing and habitat alteration, means that there are a limited number of places to establish new populations of northern hairy-nosed wombats in the future.

Both populations of northern hairy-nosed wombats are managed directly by the Department of Environment and Science. Both sites are intensively monitored and managed to: