Description and discovery: The Nangur spiny skink grows to about 19 cm with a snout to vent length of approximately 9.5 cm. Adults can weigh between 18 and 37 grams with new-born skinks weighing less than 1.5 grams. It has spiny scales along its back, tail, and flanks. It is brown in colour with dark irregular bands (sometimes quite faded) on its back. The belly is cream with the scales around its mouth barred with cream and brown. 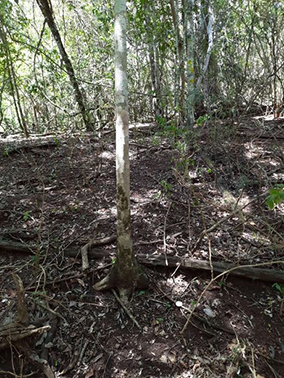 This skink is only known from South East Queensland, where it mainly occurs in semi-evergreen vine thicket and vine forest. It occurs at only two locations and genetic analysis indicates these populations became isolated from each other well over one million years ago, despite being only 40 kilometres apart.

Early surveys of the population of the first discovered population, estimated this population to be approximately 140 animals but is currently estimated to be less than 50 adults occupying an area covering less than 50 hectares. Monitoring of this population has observed a decline over the past decade with a 67% decline in animals between 2015/16 and 2019. Since 2019 the rate of decline has reduced with positive signs of the population slowly recovering with good numbers of immature animals detected during monitoring.

While recruitment into the population is encouraging, the adult population continues a slow decline. The reasons behind this decline are unclear but are believed to be due to a combination of the threatening processes described below. While recovery actions have been put in place to protect these animals including predator control and exclusion, weed control and fire management, the decline has continued and there may be other, yet unknown, reasons for this decline.

Current population estimates of the second population, indicate that there are a few thousand adult skinks over an area of approximately 850 hectares, with this population considered to be relatively stable with only small declines occurring on the margins of the population.

Extensive surveys in potential habitat at over 30 other locations have failed to find further populations. It is also currently absent from significant tracts of what appears to be suitable habitat at the two known locations. The Nangur spiny skink lives in a single-entrance burrow, normally occupied by one adult, but on occasion shared with another adult and/or juveniles. Burrows are typically constructed under a structure such as a rock or tree root and are relatively shallow, being less than 60 cm in length.

In the warmer months, the skink can be active at or near its burrow entrance any time from the pre-dawn twilight through to the post-sunset twilight. Activity peaks during the twilight periods when invertebrate activity is highest. Their home range around a burrow is unknown, however movement data from cameras monitoring burrows indicate that they spend most of their time either at or within a metre of the entrance with occasional longer forays. With this activity being focused close to the burrow entrance it often creates a smooth, distinctive platform in front of the burrow. Their diet includes a range of insect and arthropods such as beetles, spiders, slaters and other bugs.

The birth of 1-4 live young usually occurs between late January and into February and females have the capacity to breed every year. Mating has been seen to occur in the two to three months immediately following the birth of young, with gestation being around 11 to 12 months. It is unknown how long they live or at what age animals become sexually mature.

There are a number of historic, current, emerging and potential threatening processes that are likely to impact the Nangur spiny skink. Understanding the extent of the impact and the role the threat has played in the decline of the species requires further research.

The following threatening processes are believed or known to have an impact on the Nangur spiny skink:

A Recovery Plan for the Nangur spiny skink (Nangura spinosa) (PDF, 529KB) was prepared in 2010. However, new information on the species biology, population size and trajectories, and threats has been documented since the Recovery Plan was published and is being used to guide recovery actions.

The following recovery actions are currently being undertaken by the department: 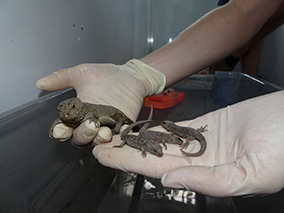 In late January 2020, 14 adults and one juvenile were collected and within a couple of weeks of being collected, three animals known to be pregnant had each given birth to twins, confirming the Nangur spiny skink bear live young. While these animals were the first Nangur spiny skinks born in captivity, they were not conceived in captivity.

Since the birth of these animals mating was observed amongst the adults and in January 2021, two sets of triplets and one set of twins were born, the first ever Nangur spiny skinks conceived and born in captivity.

The next step is to release animals born in captivity into the wild to determine if they can survive and be used to establish new populations or supplement existing populations.

Borsboom, A, Couper, P, Amey, A, Hoskin, C, 2010. Distribution and population genetic structure of the critically endangered skink Nangura spinosa, and the implications for management. Australian Journal of Zoology 58(6): 369-375