Among the hot, dry grasslands of western Queensland, the greater bilby lives far from the public interest surrounding its conservation. As one of Queensland's 15 endangered mammals, the greater bilby is the subject of intense conservation efforts. This includes attempts to replace the Easter Bunny with the Easter Bilby in Australia, in an effort to make the public aware of this important animal's plight.

The greater bilby is the size of a rabbit, and has a long-pointed nose, silky pale blue-grey fur with a tan belly, big ears and a crested black and white tail. They measure up to 55 cm in body length, and their tail can be up to 29 cm long. Males weigh 1-2.5 kg, while females are lighter and weigh 800 g-1.1 kg.

Their large ears are not for decoration, as they provide sharp hearing. This feature, combined with a strong sense of smell, is important for the greater bilby when looking for food as the greater bilby can't see very well. Interestingly when they run, they keep their nose down and this contributes to their unusual gait. 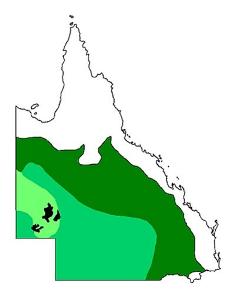 The greater bilby once ranged over most of mainland Australia, but the arrival of exotic predators has eliminated greater bilbies from most of their former range. Its closest relative, the lesser bilby, is extinct.

Today the greater bilby is found in several locations in western Queensland, with the largest remaining population in an area west of the Diamantina River, in Astrebla Downs National Park, Diamantina National Park and some pastoral properties. In 2019 the greater bilby was reintroduced to a 2,500 hectare predator-free enclosure on Currawinya National Park near the Queensland-New South Wales border. Across the rest of Australia, the greater bilby is restricted to parts of the Great Sandy, Gibson and Tanami deserts in central Australia and the Pilbara and west Kimberley in Western Australia. Greater bilbies have also been reintroduced to various sites in Western Australia, South Australia and New South Wales. 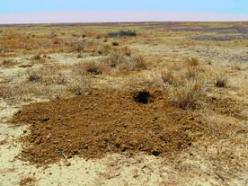 A powerful digger, the greater bilby makes spiral-shaped burrows up to three metres long and almost two metres deep. The greater bilby burrows to this depth to avoid predators and to keep the burrow at a constant temperature of 23 degrees Celsius. The greater bilby remains in its burrow during the day, emerging well after dark to forage for food. A greater bilby may have up to a dozen burrows—some for sleeping in and the others for escaping from predators. When returning to the burrow after foraging, the greater bilby often back-fills the burrow to prevent predators from entering. The burrow contains no nesting material. A burrow takes a lot of energy to dig but provides important protection, so greater bilbies will often repair and use old burrows. Some of these burrows may date back hundreds of years. 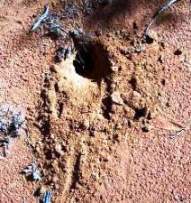 A greater bilby feeding hole, the footprints and tail-mark can be seen just below the hole. Photo: Mellisa Mayhew Queensland Government

What does the greater bilby eat?

Greater bilbies are omnivores, meaning they feed on a range of foods including seeds, fungi, bulbs, spiders and insects such as grasshoppers, beetles and termites. When looking for food, the greater bilby digs small holes up to 25 cm deep. These holes are scattered over greater bilby feeding areas.

The greater bilby has several distinctive features that it uses to find and gather its food. It uses its big ears and sharp sense of smell to find food, and it has a long, skinny tongue that it uses to lick up seeds from the ground. However, this feeding style means the greater bilby eats a lot of sand, which can make up to 20-90 per cent of its faecal waste. Another feature is that it often eats the exoskeletons of insects, which shine in the light when their scat is broken open.

The greater bilby gets most of its water from its food rather than from drinking, which means it can survive in habitats without free standing water.

Greater bilbies live alone or in pairs, and in the wild can live for about seven years.

The greater bilby is a prodigious breeder. They begin to breed when they are six months old and can produce up to eight young a year. Female greater bilbies have a very short gestation period of 12-14 days and give birth to between one and three young, but usually two.

Like another endangered burrowing marsupial, the northern hairy-nosed wombat, female greater bilbies have a backward-opening pouch, which prevents soil entering the pouch when they are digging.

Young stay in the pouch for approximately 80 days and once they are out of the pouch, they stay in their mother’s burrow for a couple of weeks. During this time their mother is very busy moving in and out of the burrow so that she can forage outside for food and return regularly to feed her young.

As greater bilbies can live in a variety of habitats, eat a range of foods, survive without standing water, and breed rapidly, they should be more common than they are. So why isn’t the outback filled with greater bilbies?

In Queensland, the impact of predators such as foxes and feral cats has had the greatest effect on greater bilby numbers and continues to be the most serious problem.

The addition of artificial water points in the arid zone provides predators with access to permanent water, which allows feral predators to exploit larger areas for hunting. Greater bilby habitat fragmentation is also increasing as a result of indirect competition for food with rabbits and other factors such as changed fire patterns.

The conservation of the greater bilby in Queensland requires the provision of adequate habitat without feral cats and foxes, and where the other threats to greater bilbies can be managed.

A large part of the greater bilby's Mitchell grassland habitat in the Channel Country is included in Astrebla Downs National Park, which protects their habitat from grazing by domestic stock.

There is ongoing research to better understand how greater bilby populations are changing over time. Broad-scale, low level aerial surveys are conducted approximately every 5-10 years to assess burrow activity. Ground monitoring of burrow status is conducted annually in the Diamantina area.

How can you help?

If you are in western Queensland and see a greater bilby in the wild, please report the sighting to your local departmental Queensland Government office.

You can also help the greater bilby and other Australian wildlife by supporting threatened species projects and caring for our native plants and animals. This will ensure our native animals survive where they belong in the bush.