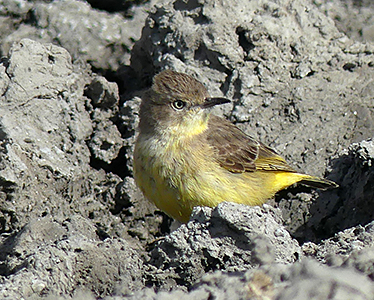 There are three recognised subspecies of yellow chat (Epthianura crocea).

The Capricorn yellow chat is found at one location at Curtis Island National Park, with the remaining populations found on private land at eight locations in the Fitzroy River delta (approximately 40km to the west of Curtis Island), and at eight locations in the Broad Sound region 140 km north. There is little or no habitat connectivity between the populations at these three broad locations.

Like the other species of Australian chats (Family: Epthianuridae), the Capricorn yellow chat breeds opportunistically following significant rainfall events. While the Capricorn yellow chat predominantly breeds in spring and summer following rainfall and inundation of the marine plains, breeding has been observed in all months except July. Rainfall and the subsequent freshwater inundation of the marine plains triggers insect activity and abundance, which provides a breeding cue for the Capricorn yellow chat. Birds have been observed to return to the same areas to breed each year and they can breed more than once per year. Breeding success is influenced by wet season rainfall in the preceding year, with the timing and volume of rainfall events also influencing breeding success.

The Capricorn yellow chat builds nests in grasses, samphire, or sedges between 35–120cm off the ground with high levels of vegetative cover within 1m of the nest. Observed clutch size ranges from 2–3 eggs, but adults have been observed feeding up to four fledglings. Nest failure has been observed due to inundation for extended periods from extreme tidal events.

During the breeding season the Capricorn yellow chat has been observed foraging on muddy substrates around the edges of channels for prey at the base of sedges and samphire, including flies, caterpillars of moths and butterflies, spiders, grasshoppers, damsel flies, winged ants, cockroaches, and beetles.

Climate change—With most areas of Capricorn yellow chat habitat just above or below highest sea levels, its habitat is particularly vulnerable to sea level rise which results in increased salinity making the wetlands uninhabitable for the bird. Sea level rise has been observed severely impacting Capricorn yellow chat habitat in Curtis Island National Park. Climate change also influences rainfall and associated hydrological regimes, and increases risk from drought, heat waves and fire, all of which have the potential to contribute to unsuitable environmental conditions for the species.

Inappropriate grazing—Throughout the species distribution ponded pastures, particularly para grass (Urochloa mutica), have been established for pastoralism. Without appropriate grazing, para grass will smother Capricorn yellow chat habitat and displace the birds, while high intensity grazing will result in trampling of essential habitat. Landowners/managers in these locations have been effective in managing grazing intensity that has allowed suitable habitat for the Capricorn yellow chat to be maintained.

Feral pigs—Feral pigs cause damage to Capricorn yellow chat habitat by uprooting sedges and grasslands that the birds use for foraging and breeding. They are also likely to disturb nests and take eggs. Feral pig numbers and impacts are influenced by seasonal rainfall patterns and their impacts are variable across the bird’s distribution.

Weed species—Multiple species of pasture grasses have the potential to smother Capricorn yellow chat habitat. Para grass is an ongoing issue that can be managed by appropriate grazing. Other potential pasture grasses of concern include aleman grass (Echinochloa polystachya) and olive hymenachne (Hymenachne amplexicaulis). The potential impact of aleman grass is unknown, while olive hymenachne is unlikely to be a problem due to its low salt tolerance. Harrisia cactus (Harrisia martinii) and prickly pear (Opuntia spp.) don’t directly impact Capricorn yellow chat habitat but have the potential to form thickets and prevent access for land managers accessing areas to undertake management works. Prickly acacia (Vachellia nilotica) is a problem at one location where it provides perching habitat for birds of prey to launch attacks on the Capricorn yellow chats, reducing their population.

Other potential threatening processes include feral predators (i.e. feral cats and foxes), increased soil salinity and unpermitted access but the impact of these threats remains unknown and they require further research. One of the key actions identified in the report was the establishment of a Capricorn yellow chat Working Group. This group was formally established in March 2021 with the aim of coordinating key stakeholders involved in the research, recovery and management of the species. Recovery actions currently underway by various stakeholders, include:

As these management actions are delivered and results from the population monitoring program and research programs are identified, this information will be updated.