Soil is the thin layer of material covering the earth’s surface and is formed from the weathering of rocks. It is made up mainly of mineral particles, organic materials, air, water and living organisms—all of which interact slowly yet constantly.

Most plants get their nutrients from the soil and they are the main source of food for humans, animals and birds. Therefore, most living things on land depend on soil for their existence.

Soil is a valuable resource that needs to be carefully managed as it is easily damaged, washed or blown away. If we understand soil and manage it properly, we will avoid destroying one of the essential building blocks of our environment and our food security. 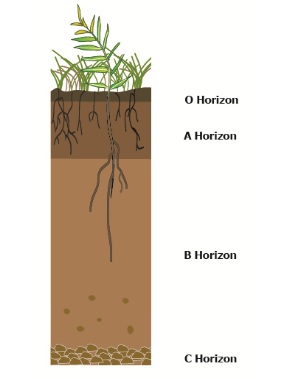 As soils develop over time, layers (or horizons) form a soil profile.

Most soil profiles cover the earth as 2 main layers—topsoil and subsoil.

Some soils also have an O horizon mainly consisting of plant litter which has accumulated on the soil surface.

The properties of horizons are used to distinguish between soils and determine land-use potential.

Soil forms continuously, but slowly, from the gradual breakdown of rocks through weathering. Weathering can be a physical, chemical or biological process:

The accumulation of material through the action of water, wind and gravity also contributes to soil formation. These processes can be very slow, taking many tens of thousands of years. Five main interacting factors affect the formation of soil:

Interactions between these factors produce an infinite variety of soils across the earth’s surface.

Soil minerals form the basis of soil. They are produced from rocks (parent material) through the processes of weathering and natural erosion. Water, wind, temperature change, gravity, chemical interaction, living organisms and pressure differences all help break down parent material.

The types of parent materials and the conditions under which they break down will influence the properties of the soil formed. For example, soils formed from granite are often sandy and infertile whereas basalt under moist conditions breaks down to form fertile, clay soils.

This begins to change the soil. Bacteria, fungi, worms and other burrowers break down plant litter and animal wastes and remains, to eventually become organic matter. This may take the form of peat, humus or charcoal.

Temperature affects the rate of weathering and organic decomposition. With a colder and drier climate, these processes can be slow but, with heat and moisture, they are relatively rapid.

Rainfall dissolves some of the soil materials and holds others in suspension. The water carries or leaches these materials down through the soil. Over time this process can change the soil, making it less fertile.

The shape, length and grade of a slope affects drainage. The aspect of a slope determines the type of vegetation and indicates the amount of rainfall received. These factors change the way soils form.

Soil materials are progressively moved within the natural landscape by the action of water, gravity and wind (for example, heavy rains erode soils from the hills to lower areas, forming deep soils). The soils left on steep hills are usually shallower. Transported soils include:

Soil properties may vary depending on how long the soil has been weathered.

Minerals from rocks are further weathered to form materials such as clays and oxides of iron and aluminium.

Queensland (and Australia) is a very old weathered landscape with many ancient soils.