Soil erosion is a widespread problem in rural and urban Queensland. If we want to save our soils, we need to understand the different types of erosion that can occur.

Raindrops hit bare soil with enough force to break the soil aggregates. These fragments wash into soil pores and prevent water from infiltrating the soil. Water then accumulates on the surface and increases runoff which takes soil with it.

Well-structured soils are less prone to break up, and the impact of raindrops is minimised if the soil surface is protected by plant or litter cover. The vulnerability of soils to water erosion depends on: 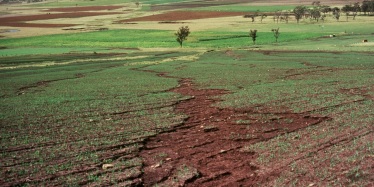 Rill and sheet erosion on a cultivated paddock

Hill slopes are prone to sheet erosion and rill erosion. The amount of hill slope erosion largely depends on how the land is used.

Sheet erosion occurs when a thin layer of topsoil is removed over a whole hillside paddock—and may not be readily noticed.

Rill erosion occurs when runoff water forms small channels as it concentrates down a slope. These rills can be up to 0.3m deep. If they become any deeper than 0.3m they are referred to as gully erosion. 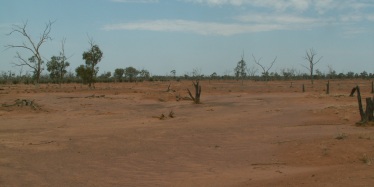 Scalding can occur when wind and water erosion removes the top soil and exposes saline or sodic soils. Raindrop impact alone can result in large amounts of soil being moved. However water or wind moving over the surface will remove more soil, and contribute to sheet, rill and gully erosion.

Erosion also tends to remove the lighter, smaller soil particles first (such as clay and silt), leaving fine and coarse sand behind.

A combination of large amounts of fine sand and small amounts of clay at the surface means the soil tends to seal and set hard, which limits infiltration (water entering the soil). For example, a waterfall may form, with runoff picking up energy as it plunges over the gully head. Splashback at the base of the gully head erodes the subsoil and the gully eats its way up the slope.

Gullies may develop in watercourses or other places where runoff concentrates. In cultivation or pastures, advanced rill erosion can develop into gully erosion.

This type of erosion is highly visible and affects soil productivity, restricts land use, and can damage roads, fences and buildings.

Gully depth is often limited by the depth of the underlying rock which means gullies are normally less than 2m deep. However, gullies may reach depths of 10–15m on deep alluvial and colluvial soils.

Gully development may be triggered by: 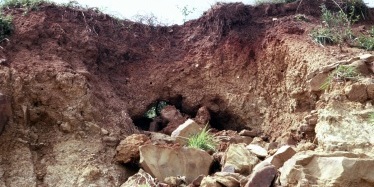 Tunnel erosion is the removal of subsoil.

When water penetrates through a soil crack or a hole where a root has decayed, the soil disperses and is carried away with the flow to leave a small tunnel.

Initially, the surface soil remains relatively intact but, with every flow, the tunnel becomes larger and the soil may eventually collapse and form a gully.

The whole process speeds up significantly if an outlet is provided (such as an existing gully or cutting in a roadside) as this allows free flow of subsurface drainage water.

Soils vulnerable to tunnel erosion have dispersible subsoils with naturally high levels of sodium. Such soils are referred to as being sodic and are called Sodosols.

When clods of these soils are exposed to water, they readily break down into individual particles of sand, silt and clay which are easily removed as water moves through the subsoil. 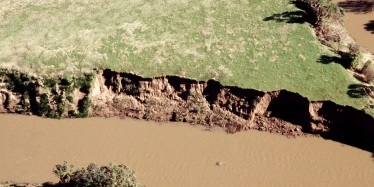 Recent floods have made stream bank erosion a widespread problem across Queensland.

The major cause of stream bank erosion is the destruction of vegetation on river banks (generally by clearing, overgrazing, cultivation, vehicle traffic up and down banks or fire) and the removal of sand and gravel from the stream bed.

Stream bank erosion can also be accelerated by factors such as: 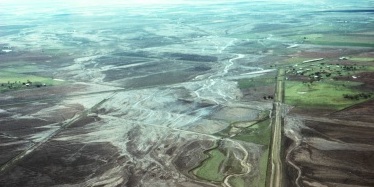 Erosive flooding on a floodplain

Some of Queensland’s best agricultural land is on floodplains because of the high fertility soils and availability of water for irrigation. These areas are subjected to high velocity floods that erode soils with insufficient surface cover.

This erosive flooding can remove the entire layer of cultivated topsoil exposing compacted subsoils. It is common for such areas to be stripped of 0.1 to 0.15m of topsoil.

The risk of erosion on floodplains depends on:

Problems can also occur at the end of a flood event when slow moving water flows over saturated soils. 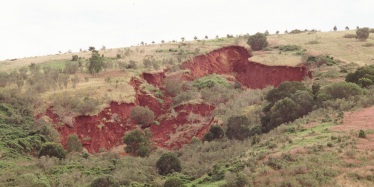 Example of mass movement—landslip on a steep slope near Coolangatta, Queensland

Different forms of mass movement include:

During periods of prolonged and heavy rainfall, water entering permeable soils can be stopped by a barrier such as bedrock or a clay-rich soil horizon.

The heavy weight of this saturated soil can slide downslope if it is sitting on a rock surface loosened by the build-up of water in the soil.

It is better to prevent landslides than pay for expensive, time-consuming rehabilitation which may only be partially effective.

Trees should not be cleared from susceptible locations.

As excessive water intake is the most common trigger of landslip, avoid obstructions such as dams or cross-slope drains. Wind erosion is a significant problem in the arid grazing lands of inland Queensland.

It is most likely to occur when strong winds blow over light-textured soils that have been heavily grazed during drought periods.

It contributes to scalding, a process that forms smooth, bare areas on impermeable subsoils.

These areas, which vary from a few square metres to hundreds of hectares, are difficult to revegetate due to:

Generally, wind erosion is not a serious issue in cropping areas. Most soils cultivated in Queensland have a heavy texture—forming relatively large aggregates that are too coarse to be carried by strong winds.

However, sandy soils are vulnerable to wind erosion because they cannot store very much moisture and have low fertility. This limits their use in Queensland, with only small areas (where irrigation is available) being cultivated for horticulture or growing vegetables.