Programs to control erosion in Queensland began in the 1950s and have been very successful.

The 3 main principles to control erosion are to:

Soil erosion can be avoided by using land within its capability.

The land’s position, soil type and slope determine how vulnerable it will be to erosion. It may not be suitable for agriculture, or suitable only for an activity which limits erosion.

There are a number of resources to help determine how land should be used to avoid erosion: Surface cover is a major factor to control erosion because it reduces the impact of raindrops falling on bare soils and wind removing soil particles. It also reduces the speed of water flowing over the land.

Erosion risk is significantly reduced when there is more than 30% soil cover. Total cover is achievable for many grazing and cropping systems.

Runoff concentrates as it flows downslope. By the time rivers draining large catchments reach the coast, they are usually just a few hundred meters wide. Even though surface cover encourages runoff to spread, runoff concentration is inevitable. 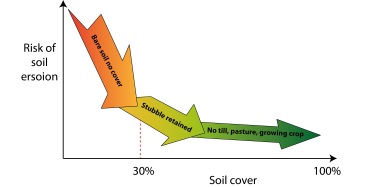 The relationship between cover and soil loss

Coordination across the catchment is important when implementing runoff control measures. Runoff may pass through several properties and cross several roads (sometimes railway lines) as it passes from the most remote part of a catchment to a major drainage line or creek.

Experiment: the importance of cover

The importance of cover was shown in an experiment at Mt Mort, near Ipswich (see table below). In treatment C, where the land was almost bare, 70% of rainfall from a 54mm storm was lost as runoff. The soil loss from this one event was 22 tonnes per hectare. Treatments A and B with higher cover levels had much less runoff, soil and nutrient loss.

It can take thousands of years to form an inch of soil. The depth of soil lost from treatment C from this one storm event may take hundreds of years to replace, provided no further erosion occurs.

In forests, the soil surface is usually protected by a layer of mulch from decaying vegetation as well as a variety of surface growing plants. If the soil is bare under the tree canopy from over grazing, vehicles or pedestrians, soil erosion will still occur. 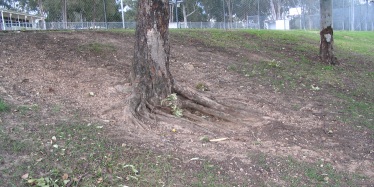 Bare soil under trees is susceptible to erosion

Conservation cropping practices that maintain cover on soils include minimum and zero tillage practices. Nowadays during the fallow period, farmers use tillage implements that kill weeds without burying stubble and herbicides to minimise the frequency of tillage.

Runoff concentration is managed by structural measures such as contour banks in upland areas, or strip cropping on floodplains. These systems involve a total change in the way a farm is managed.

Runoff systems must be carefully planned. Flow between properties and across roads and railway lines must be coordinated and suit those affected by the changes. When runoff water can impact neighbouring properties or infrastructure, land owners are encouraged to discuss with their neighbours and seek professional advice.

Approximately 80% of soil lost as a result of poor cover can be trapped in the paddock by contour banks. The banks channel the runoff at low speed into grassed waterways. Good surface cover between contour banks and in waterways will ensure their stability and dramatically reduce the amount of soil deposited in waterways. 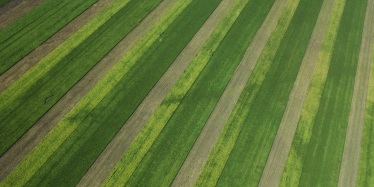 Strip cropping over a floodplain on the Darling Downs

On flood plains, strip cropping is used to spread flood flows rather than allowing it to concentrate.

Another measure that maintains soil cover is green cane harvesting or ‘trash blanketing’. When a cane crop is harvested, the leaves and tops of the cane are left on the ground as a ‘trash blanket’. This protects the soil from erosion by raindrop impact. This practice has been widely adopted in many Queensland cane growing districts. 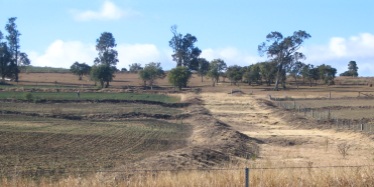 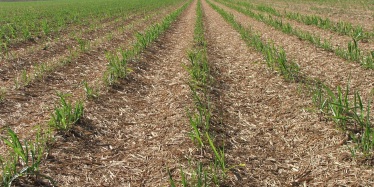 Green cane harvesting on a paddock in North Queensland

Surface cover is the key to erosion control in grazing lands. It prevents erosion by maintaining the soil so it can absorb rainfall.

A well-managed pasture with good cover will ensure that runoff spreads rather than concentrates. Bore drains, tracks, roads, cattle pads and fences concentrate runoff, so careful planning is required to ensure that property improvements are located where they will not contribute to erosion.

The critical level of cover for pastures in tussock grasslands is about 40% cover and 1000 kilograms per hectare of dry grass. Ideally, this level of cover will exist at the beginning of the summer storm season.

The ideal stocking rate is flexible, and stock numbers should match available feed. Regular monitoring of pastures is necessary to achieve this. Long-term weather forecasting, using predictive tools such as the Southern Oscillation Index (SOI), has improved the options available for predicting droughts.

Opportunistic spelling should also be part of a grazing strategy. A total spell in a good year may be required to allow desirable grasses to recover from past grazing. Grazing pressure can also be managed by locating watering points away from areas vulnerable to erosion.

Fire is useful for controlling woody weeds but it needs to be managed carefully. Regular burning of pastures will further reduce ground cover and promote runoff and erosion. 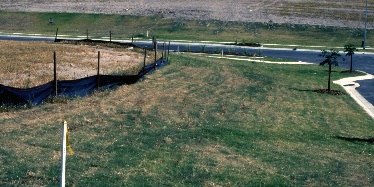 Use of a sediment fence and grassed strips on a development near Sinnamon Park, Brisbane

The following approaches will help reduce erosion on development sites: