The Queensland  Multicultural Awards recognise the valuable contributions of Queenslanders who  support and promote a united, harmonious and inclusive Queensland community.

In 2017 the awards acknowledged the theme: Creating Welcome,  Building Opportunity, and Celebrating Diversity. 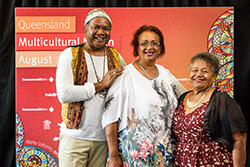 The Mesh & Knots MASSI MATSI Women’s Group consists mainly of Australian South Sea Islander (ASSI) elders who are passionate advocates of the ASSI community in Mackay. They raise awareness about heritage by promoting their culture through community projects, education and sport.

Some of Mesh & Knots’ projects include:

The group is working to strengthen ties between Mackay and Rockhampton ASSI communities and contributed to the celebration of the ASSI Mackay’s 150th anniversary of the arrival of the first South Sea Islanders to Mackay.

While Mesh & Knots considers itself Australian with a deeply rooted history in Queensland, they are committed to contributing their stories to the Mackay conversation and promoting the township as their home and the home of their ancestors—a place where all people are welcome. 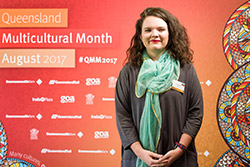 Tamara has developed a diverse community of young leaders who are committed to advancing and promoting a diverse Queensland—which is fair, unified and representative. She has also helped develop the Brisbane Discussion Group and assisted young leaders from New Zealand and Papua New Guinea to develop the PACE 48 Indigenous Cultures Youth Network.

Tamara remains committed to facilitating intercultural and interfaith dialogue and believes that facilitating discussions will build more tolerant and harmonious societies and break down the barrier between 'we' and 'others'. Michael Hornby has been the Principal for almost two years at Mable Park State High School, located in Logan City, one of Australia’s most culturally diverse cities.

In this role, Michael helped create an office space for Access Community Services Limited to support refugee students’ transition into the school system and a ‘United Cultural Centre’ for parents and students.

He has also: made safe areas and ‘yarning circles’ around the school to help with conflict resolution and racial issues; pushed to receive more ‘English as a second language’ teachers and teacher aides;  increased reading sessions for non-English speaking students; and included a prayer room for students. He even added interschool sport to the curriculum (including futsal and soccer) to increase participation and social interaction between students.

Michael’s actions have made students from all cultures feel welcome, inclusive and safe at Mabel Park State High School. He has created a sense of belonging which has reduced stress and made the settlement journey more enjoyable for students and their families. 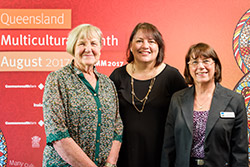 The Dalby Welcoming Community Inc. (DWC) was created in 2008 to promote Dalby as a more welcoming community, particularly to people from different cultures working on construction and resource sector projects.

The DWC has supported cultural diversity by engaging with and supporting various cultural groups, encouraging employment from diverse cultures, linking with schools to inspire children to appreciate and celebrate diversity, hosting festivals and much more. Dalby even has a “Say G'day Day”, encouraging locals to say “g'day” to someone they don't know.

DWC’s Delicious & DeLIGHTful Festival has become a signature event for Dalby with people from a variety of cultures gathering to celebrate and share multicultural experiences including food stalls and showcasing their heritage through music and dance.

Festival planning includes input from cultural groups and individuals to maintain a sense of authenticity and build social cohesion. Festival goers agree that the event has helped to build a sense of community in Dalby: “I moved my family to Dalby. If a regional town can put on a multicultural festival like this, then this is where I want to live."

In 2016, the program provided 10 part-time positions, offering half to international students (via Study Brisbane) and the other half to youth from refugee and migrant backgrounds (via MDA Ltd).

The program experience helped to give these employees the confidence to know they can perform successfully in a job and made them feel more connected to and welcomed by the local community.

Seven of these employees are still working for AFL Queensland and will become mentors and provide training and development for the 2017 intake of this program, which has been expanded to take on 16 new recruits.

The Diversity Employment Program has given AFL Queensland’s current staff of close to 250 people a different perspective of thinking, life experience, traditions and beliefs, which has led to a greater understanding of cultural diversity and an inclusive workforce. 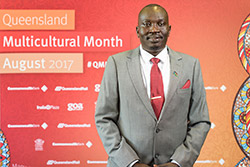 David and SBS news journalist, Stefan Armbruster, partnered to co-produce a special story about a small business growing okra in Queensland. The story breaks cultural stereotypes and portrays how life in Australia challenges traditional roles. While traditionally it is the women growing okra in South Sudan, the story explores how Dinka men are growing okra and providing the vegetable to their families here in Queensland.

Okra is common cooking ingredient used in Africa, the Mediterranean, the Middle East and throughout Asia. The vegetable is a staple in Dinka cuisine, which can be hard to find and expensive to purchase in Queensland. The main talent in the story, Mr Athian, started growing okra in his Brisbane backyard, so he could afford to feed his family. It didn't take long before he started to cook the vegetable too.

David and Stefan’s story is a working example of how gender roles in Southern Sudanese communities are changing as they adapt to life in Australia. This story was broadcast in Dinka and English, published across multiple platforms and generated a massive response. It promoted positive change, transformation and entrepreneurship within a culturally diverse community. The Culturally and Linguistically Diverse Recruit Preparatory (CALDRP) Program is a 10 week training course run by the Queensland Police Service (QPS) and offered to individuals who want to become police officers from non-English speaking backgrounds. The program actively targets and engages applicants from multicultural communities to increase cultural diversity, so that officers better reflect the community they serve.

Since 2016, there have been two CALDRP programs. The 37 individuals who successfully completed programs have been accepted as recruits and are all undergoing training to become constables.

The QPS acknowledges that each culture has unique strengths and perspectives, which can be used to solve community problems. By recruiting applicants from diverse backgrounds, an open, more trusting relationship is created between the QPS and multicultural communities. These relationships help overcome and prevent racial and ethnic division, particularly in communities where policing in home countries may have been perceived negatively.

The CALDRP program has demonstrated the importance of creating a service that is as diverse as the community it serves.