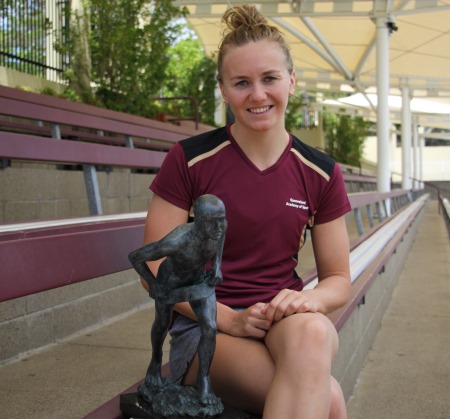 The annual Peter Lacey Award for Sporting Excellence is presented by the Queensland Academy of Sport (QAS) to an athlete who has achieved great success on the international stage while serving as an exceptional ambassador for sport.

The accolade was named in honour of the late surf lifesaving legend and QAS founding father, Peter Lacey.

Peter Lacey was a surf lifesaving legend, business leader and founding father of the QAS. His strength, resilience and determination to succeed was evident not only in competition where he amassed 14 World Championship titles, but also his business endeavours and family/personal life.

His integrity and true sportsmanship qualities impelled the organisation to grant him the recognition he deserves by establishing an award in his name.

With this, the QAS and its athletes strive to uphold Peter Lacey’s lasting legacy of excellence.

Following her sensational year in the pool and ongoing contribution to her sport and the community, Ariarne was deemed a very worthy and deserving recipient of the Academy’s most prestigious award.

In concurrence with her busy training and competition schedule, Ariarne also managed to find time to continue her ambassador role with the Eloise Gannon Foundation and give back to the swimming community by hosting a number of clinics for younger swimmers.

In light of her achievements and like all previous Peter Lacey Award winners, Ariarne epitomises sporting excellence and embodies the spirit, sportsmanship and determination of Peter Lacey.