The survey of the Queensland – New South Wales border was to be made up of 3 components:

The parallel of latitude and the border ranges had to be surveyed. The river section did not require survey as it is a natural feature and readily identifiable. 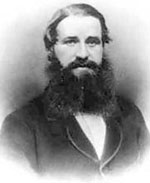 Courtesy of the State Library of Queensland

In 1855, Sir William Denison Governor of New South Wales, wrote to Henry Lebouchere, the Secretary of State for the colonies and recommended that a boundary:

‘Starting from Cape Danger and following the range of hills which now separate the district of Clarence River from that of Moreton Bay, it should continue along the ridge forming the boundary of the basins of the Richmond and the Clarence until it reaches the Parallel of 29º of south latitude, along which it should continue westward till it reaches the meridian of 141º East…’

Following much debate this was the border included in the 1859 Letters Patent.

In 1863, surveyors Francis Edward Roberts from Queensland and Isaiah Rowland from New South Wales were chosen to survey the boundary line. 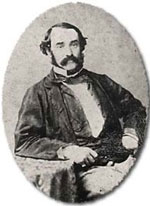 Starting from Point Danger in June 1863, the surveyors marked a rock with their initials. The mark included a colony abbreviation and the last 2 digits of the year. However, the rock mark was lost at the turn of the century, probably due to quarrying.

Although 2 separate surveys were carried out, in many instances both surveyors used the same tree to mark the corners. As a result of the 2 different surveys, Rowland and Roberts defined the border in different positions. At the direction of the Queensland Surveyor-General, Roberts deviated from the definable position of the watershed in order to increase accuracy of the survey.

The New South Wales and Queensland governments have since essentially adopted the survey of Roberts in preference to that by Rowland.

The purpose of the survey was to give landholders in the vicinity of the border an indication of the extent of their leases and rent payable in each colony.

WD Campbell reported in The Surveyor in 1895:

‘In 1865, an arrangement was made between New South Wales and Queensland for the fixing of the position of the intercolonial boundary line, the 29th parallel of latitude, at the intersections of the Rivers Barwon, Mooni, Bokhara, Narran, Biri and Culgoa, to enable the Governments of the respective colonies to adjust the rents of leases of the several pastoral runs affected, some of which were partly in both colonies... The marking of the border was done with steel [iron] pins one inch in diameter and two feet long, driven a few inches below the surface ... This process was repeated at each of the above named rivers, and the work was completed in five or six weeks.’ 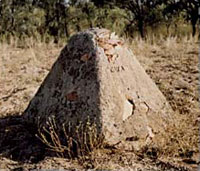 Zero obelisk on the banks of the Warrego River

The official survey of the 29ºS parallel was conducted by John Cameron (NSW) and George Watson (Qld) between 1879 and 1881.

Astronomical observations were taken at the Barringun telegraph station to determine the latitude and longitude. Following these observations, the zero obelisk was erected on the banks of the Warrego River, just north of the town.

From this mark, the first 5 mile chord was produced westerly and the mile posts offset from this chord to the arc (chord and arc are used when surveying latitude to allow for curvature of the earth). This continued until the survey intersected longitude 141º (now Cameron Corner), a distance of 285 miles 24.96 chains.

Watson withdrew from the survey and Cameron then returned to the zero obelisk at Barringun and marked the line to the east in a similar fashion. Cameron then erected a 1 ton post on the west bank of the Barwon River to mark the end of the survey.