Zika is a mosquito-borne virus transmitted to humans by infected Aedes aegypti and the Aedes albopictus mosquitoes. These mosquitoes can also transmit dengue.

There have also been reports of Zika virus being spread through sexual activity.

Zika virus is usually a mild disease, though there are possible risks to unborn babies if a pregnant woman is infected with Zika virus during her pregnancy.

There is no vaccine or treatment for Zika virus. It usually lasts 4 to 7 days and is confirmed by having a blood test.

It is important to understand that any country with dengue transmission also has the potential for Zika virus transmission.

To date, there has not been any local transmission of Zika virus in Queensland. However, some people have contracted the disease overseas and returned to Queensland.

This map shows the countries where people have contracted Zika virus and then returned to Queensland. 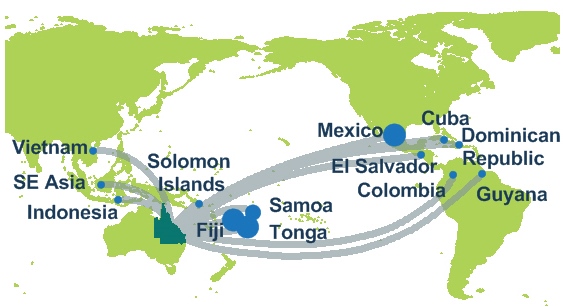 The table below shows the number of cases since 1 January 2016.

The Queensland Government is:

There are possible risks to unborn babies if a pregnant woman is infected with Zika virus during her pregnancy. Women who are pregnant, or planning pregnancy, and their partners should consider deferring travel to Zika affected areas and consult their doctor before travelling.

Travellers should stay informed about Zika virus and see their local health or travel authorities if they are concerned. It is recommended that women who are pregnant, or planning a pregnancy, consider delaying overseas travel to affected areas.

When travelling to Zika affected areas, you should avoid being bitten by mosquitoes and take safety measures such as wearing light coloured long-sleeved shirts and long pants, using insect repellent containing DEET (diethyltoluamide) or picaridin and staying in air-conditioned or screened rooms. Women should avoid unprotected sex and pregnancy.

If you have returned from an area with current Zika virus transmission, and feel unwell, or felt sick while you were away, see a doctor as soon as possible and mention your recent travel.

See a doctor if you are pregnant and have recently travelled to areas affected by Zika virus.