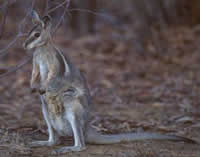 The bridled nailtail wallaby is a small wallaby with the adult weight range for males 5-8 kg and females 2-6 kg. It is grey to light tan in colour with distinct white lines forming a 'bridle' from the back of the neck to behind the forelimbs and along the sides of the face. It also has a black stripe down the length of the back. The early naturalist, John Gould, first described the species in 1840 as “…one of the most graceful objects that can be conceived”.

The bridled nailtail wallaby lives in dense acacia shrubland and open grassy woodland but prefers transitional vegetation between these areas. It was one of many species of kangaroos and wallabies hunted by many Aboriginal groups. At the time of European settlement,  the bridled nailtail wallaby was a common species with a distribution reaching from the west of the Great Dividing Range, north to Charters Towers in Queensland, south to north-western Victoria, and possibly extending west to eastern South Australia. It now survives in a small percentage of the area it once inhabited.

For over 30 years the species was believed to be extinct as there had been no confirmed sightings since 1937. Then, in 1973 the species was ‘re-discovered’ by a fencing contractor who, after reading an article about Australia's extinct species in a magazine, reported that there was a population of bridled nailtail wallabies on a property in central Queensland near the town of Dingo. This was confirmed by Queensland Government researchers and this property and an adjoining property were eventually purchased and became Taunton National Park (Scientific). The current population estimate for Taunton National Park (Scientific), including neighbouring properties, is approximately 1,500 wallabies.

Bridled nailtail wallabies are usually solitary animals, but sometimes form small aggregations (4-5 animals) when feeding or when females have young. The main defence strategy of the bridled nailtail wallaby is to hide rather than flee, which is uncommon in macropods. They are inactive during the day with most of their movement related to maintaining their position in the shade of bushes. Adults often rest and shelter in hollow logs or under young brigalow trees.

Bridled nailtail wallabies can breed all year round and potentially have three young per year. The gestation period is around 24 days and young stay in the pouch for 119-126 days. Immediately after the young emerge from the pouch the females hide their young in low, dense vegetation during daytime resting periods. They mature at a young age (females at 136 days and males at 270 days). However, it may take up to 18 months before a male is large and strong enough to successfully mate.

The preferred diet of the bridled nailtail wallaby is largely non-woody broad-leafed plants, chenopods (succulents including pigweed), flowering plants and grasses. Potential competitors for this food include the black-striped wallaby Macropus dorsalis, domestic stock and rabbits.

Threats that have contributed to the decline of the bridled nailtail wallaby in Queensland include:

A national recovery plan for the species was developed in 1991 and had three iterations until the last five-year plan was written in 2005 (Lundie-Jenkins & Lowry, 2005).  A Conservation Advice was completed by the Commonwealth’s Threatened Species Committee in 2016, outlining conservation and management priorities for the species including:

Re-introductions: New populations of the bridled nailtail wallaby have been established in habitats it once occupied to aid recovery of the species in the wild. During 2001 – 2005, bridled nailtail wallabies were released into Avocet Nature Refuge, part of a large private property south of Emerald, and is now home to a second population of approximately 100 wallabies. In 2014, a ‘nursery’ enclosure was funded by Wild Mob and built on Avocet Nature Refuge to reduce the high mortality rate of young bridled nailtail wallabies from predation by feral cats. Independent wallabies weighing less than 3 kg and females with pouch young caught in the wild are released into this 9.2 hectare predator-proof enclosure. Once adult females within the nursery are not supporting young, and juveniles have matured into adults weighing more than 3 kg, they are released back into the wild at Avocet. Given the absence of effective feral cat control strategies, this head-starting program is a relatively cost-effective and successful conservation option.

A translocated population was established at Idalia National Park in 1996 however after a rapid decline from predation and drought the last remaining animals were captured and taken into captivity in 2015 and the species is not believed to have persisted in the area.

A recent collaboration between the New South Wales (NSW) and Queensland governments and the Australian Wildlife Conservancy (AWC) has established a population at a large fenced enclosure at Pilliga State Conservation Area in NSW. Bridled nailtail wallabies were translocated from both Taunton National Park (Scientific) and the AWC-managed Scotia Sanctuary in NSW to establish this population. A further fenced population is proposed for Mallee Cliffs National Park in NSW in 2020-21.

What can you do to help this species

Gordon, G and Lawrie, BC 1980. The rediscovery of the bridled nailtail wallaby (Onychogalea fraenata Gould) in Queensland. Australian Wildlife Research 7: 339-345.