About the Great Barrier Reef 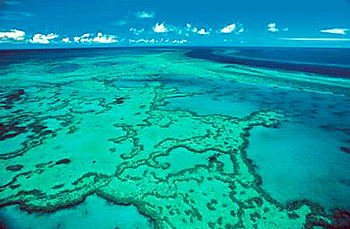 World heritage listed in 1981, the Great Barrier Reef is the world’s largest and most complex reef system and one of Australia’s most treasured natural wonders. Larger than New Zealand (344,400 square kilometres or 70 million football fields), it is home to a breathtaking array of life including a number of rare and threatened species as well as:

The Great Barrier Reef stretches more than 2300 kilometres along Queensland’s coastline and is made up of around 3000 individual coral reefs.

It is of special significance to Aboriginal and Torres Strait people with a number of cultural sites on many of its islands. Historically, it supports around 64,000 jobs and contributes approximately $6.4 billion to the Australian and Queensland economies.

The World Heritage Committee considers the state of conservation of world heritage properties. In July 2015, the committee met and unanimously agreed not to place the Great Barrier Reef on the world heritage ‘in danger’ list.

The decision recognised the significant work by the Australian and Queensland governments, in partnerships with scientists, Traditional Owners, community and industry to further protect and manage the Great Barrier Reef with the development of the Reef 2050 Long-Term Sustainability Plan (Reef 2050 Plan).

The Great Barrier Reef Marine Park Authority and Queensland Parks and Wildlife Service manage the park through a joint field management program and through laws and zoning plans.

Tourism, fishing, recreation, traditional use, research, defence, shipping and ports are all carefully managed through zoning plans that define what activities can occur in what locations to minimise environmental impact and conserve the majestic marine environment.

In the catchments adjacent to the reef, the Queensland Government works with farmers, industry and other groups to ensure everyone plays their part in improving the quality of water flowing to the reef through the Queensland Reef Water Quality Program.

The Great Barrier Reef has lost almost half its coral cover since 1985 and is under pressure from:

Reef health (coral, seagrass and marine life) has been declining due to poor water quality and the cumulative impacts of climate change, including warmer weather leading to coral bleaching and increased severe weather events, such as cyclones.

Over the past two decades, the Great Barrier Reef has experienced several mass coral bleaching events. Bleaching occurs when corals are stressed, in this case from overheating.

Excess nutrients, fine sediments and pesticides from agricultural run-off and other industries pose the biggest risk to reef water quality. Sediment smothers corals and reduces the amount of light reaching seagrasses and other plants, affecting their growth and survival as well as the survival of the marine animals that depend on them for food and shelter. Excess nutrients may be linked to outbreaks of the coral eating crown-of-thorns starfish.

You can read more about the science and the reef’s complexities in the 2017 Scientific Consensus Statement – Land Use Impacts on the Great Barrier Reef Water Quality and Ecosystem Condition.