Understanding the functioning of an island is not just a biological question. We need an input of information from geomorphologists, from the oceanographers, the people who study the seabirds, the turtles. There's a whole range of skills that have got to be brought together.

I first visited Raine Island in 1975 and that's the beginning of the scientific monitoring of the population. We next came back to look at the hatchlings in February of 1997. To our horror we found dead eggs, down in the sand. A water table that was flooding eggs. We've come to the conclusion that the depth of sand has decreased. The first attempt to make a change to the beach, where the sand was heaped up to increase depthand then over the next couple of years does it improve the nesting success? Does it improve hatching success? The results are looking promising. So they're now expanding that to a longer length of beach, shifting sand up, making it deeper, progressively testing to make sure we're getting it right.

The 2300km Great Barrier Reef is home to an abundance of wildlife with more than 1600 types of fish, 30 species of whales and dolphins, and 215 species of birds including 22 species of seabirds and 32 species of shorebirds. It is also home to marine turtle species which are experiencing a decline in their populations.

Marine scientists and conservationists are monitoring and undertaking action to protect marine turtles and their habitat.

On the Great Barrier Reef you can find six of the seven marine turtle species in the world. Unfortunately, four of these turtles are on the endangered species list (loggerhead, olive ridley, hawksbill and leatherback) and two are considered to be vulnerable (green and flatback).

The threat of predation on marine turtle nests and hatchlings is a key concern for the sustainability of turtle populations in coastal Queensland. To address this, marine turtle rookeries along the coast have been identified under the Nest to Ocean Turtle Protection Program for active nest protection and predator control efforts to reduce the threat posed by feral pigs and other predator species.

This is why the Queensland Government is working with research organisations, industry, conservationists and Traditional Owners to take action to protect marine turtle species across Queensland. 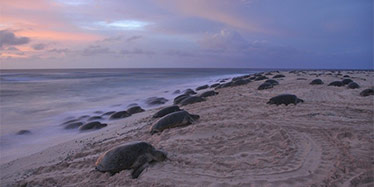 Each year variable numbers of female green turtles, from a few thousand to approaching 100,000, swim thousands of kilometres from their feeding grounds in Indonesia, Papua New Guinea, Arnhem Land, Gulf of Carpentaria, the Torres Strait and the Coral Sea Region, to Raine Island—at the northern end of the Great Barrier Reef—to lay their eggs on its sandy beach.

With the Raine Island ecosystem under threat and turtle deaths, varying from a few tens to thousands per breeding season, urgent action is being taken to protect the island’s marine wildlife and its habitat, particularly the nesting beaches of green turtles.

Find out more about what is being done to protect Raine Island’s precious ecosystem.

Queensland’s loggerhead turtle research program has been running for 50 years, focusing on the Mon Repos turtle rookery. Satellite technology is used to track turtle movements to understand migratory patterns and habitat under threat.

Visitors are welcome at the Mon Repos Turtle Centre to learn about loggerhead turtles and participate in a guided turtle encounter by highly experienced and knowledgeable Queensland Parks and Wildlife Service rangers.

Find out more about projects that help turtles:

How you can help

From the Great Barrier Reef to Moreton Bay, all Queensland waterways are connected. There are things all of us can do to help. For example, avoiding littering, wherever you live, will prevent litter getting into waterways and making its way to the Great Barrier Reef. If you live in Reef catchment areas, you can make sure soil and fertiliser stays on your property.

You can also help by reporting marine wildlife strandings by calling 1300 130 372.

Find out more about how you can help.