Well I've been in love with the reef for probably most of my life. I first saw the reef in 1969 as a 10 year old. While the men were walking on the moon, I was glued to the Reef.

It's got habitat that supports thousands upon thousands of species all of which work together to make this a wonderful place. The Great Barrier Reef is still great but it's facing some challenges that we need to deal with. We've got climate change now that's...that's really the number one threat. Some of the work we've done on Heron Island has really started to look at recreating the future and exploring what ecosystems will look like if you change the CO2 and change the temperature. We've grown these little miniature replicas of...of the Reef. We take water from the Reef crest, it flows through a special chamber which adds CO2 and temperature and you can then replicate.what happens in a world in which we don't deal with CO2. And what you see is really interesting.

Reef one: You have much of what you've got today. But if you don't take action on climate change,you get to Reef Two, and that's where the corals are disappeared, all the invertebrates, all these little creatures that live around those reefs have disappeared and the reef is flat. Reef number three is the most interesting. If you do something. You can get to a condition where actually you do preserve a lot of coral. The experiments do have a message of hope. If we take action on climate change we'll still have a reef that functions like a reef and that... that's really important. Because once this is gone, and it will be if we don't deal with the emissions of CO2, then we will have lost something that can never be brought back. The solutions here involve the entire community. We can solve the challenge of climate change and we can preserve a large part of the Reef. But we've got to start today.

Scientists, industry and community groups are working alongside the Queensland Government to address climate change.

Climate change is the single biggest threat to reefs worldwide. This is underscored by the recent severe coral bleaching events on our Great Barrier Reef.

Coral bleaching is a result of stress on coral, such as heightened sea temperatures resulting from the changing climate. These stressors cause the coral to expel its colour-giving algae, the main food source for coral.

Yet there is promising research, such as that led by Professor Ove Hoegh-Guldberg, which shows if serious action is taken now to reduce emissions and to adapt current practices, the Reef may be given its best chance to recover.

In addition to addressing climate change, improving the Reef’s water quality and taking action to reduce the harmful coral-eating crown-of-thorns starfish are critical to boosting the Reef’s resilience and its ability to recover. 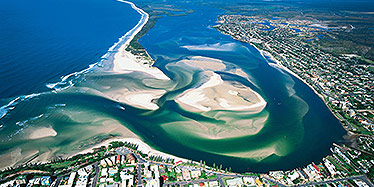 Planning for the future is vital to maintaining our way of life and safeguarding homes, businesses, infrastructure and services along the Queensland coast.

The Queensland Government, in partnership with the Local Government Association of Queensland, is investing $12 million in QCoast2100 to help coastal councils and their communities plan and prepare for storm tide, coastal erosion and rising sea levels resulting from climate change.

Incorporating climate change related coastal hazards into decisions such as where we build new housing developments, how we manage our roads and foreshore areas, and how we organise our emergency services is critical to the safety and prosperity of our communities.

The Queensland Government plans to radically reduce carbon pollution to achieve zero net emissions by 2050 and make Queensland a leader in the clean growth economy.

The Queensland Climate Adaptation Strategy provides a framework for an innovative and resilient Queensland that manages the risks and harnesses the opportunities of a changing climate.

The Queensland Climate Transition Strategy sets a vision of a zero net emissions future for Queensland that supports jobs, industries, communities and our environment. The savanna burning methodology maintains traditional Aboriginal practises and is based on small fires being lit early in the dry season mostly by Aboriginal rangers. The ‘cool’ burns have reduced greenhouse gas emissions and help prevent larger wildfires that release huge emissions and threaten biodiversity.

Carbon farming is fast becoming a central component of Queensland’s response to climate change, bringing economic diversity to the land sector, helping the state to meet its international commitments under the Paris Agreement and its goal of reaching a zero net emissions economy by 2050.

How you can help

Everybody taking everyday actions can help to ease the stress on the planet. One way you can help is by reducing your carbon footprint—for example, choose a car based on its fuel efficiency, use public transport where possible, wash clothes in cold water, buy green energy, and upgrade your lightbulbs.

Find out more about how you can help.