Algal blooms and algal drifts are common seasonal events in Queensland's coastal environments. Algae play an important ecological role in marine and estuarine environments, however, some blooms have the potential to be harmful to humans and other animals; while some blooms may cause a nuisance impact (i.e. cause odour).

There are a number of different bloom-forming alga species found in Queensland's coastal waters, including red, brown and green macroalgae, cyanobacteria, dinoflagelates and diatoms. Two species that commonly cause problems are types of cyanobacteria called Lyngbya majuscula (= Moorea producens) and Trichodesmium spp. The popular (although scientifically inaccurate) name for cyanobacteria is blue green algae, which refers to the green (chlorophyll) and blue (phycocyanin) pigments in their cells. 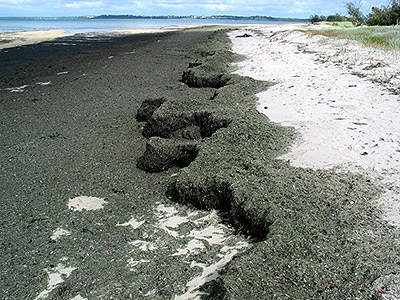 L. majuscula washed up on a beach.

If you see large mats of black weed that have washed up on a beach it may be L. majuscula. Although L. majuscula blooms may occur naturally, they can occasionally have environmental and health impacts. Any public health risks caused by L. majuscula are usually managed by local councils under the Public Health Act 2005.

Habitat: Common in seagrass communities in sheltered estuaries and bays, growing either as mats, on seagrass leaves or detaching and drifting in the water column among seagrass or in unvegetated areas. Blooms can occur at any time of the year but are most commonly in south-eastern Queensland between the months of October and March when increased temperatures, sunlight and other environmental factors create favourable growth.

Identification: Appears as mats floating on surface drifting with currents, winds and tides. Mats may become stranded on beaches and foreshores in intertidal areas.

Problems: In the past, L. majuscula blooms have impacted on the environment and people’s health. Blooms in Moreton Bay were first reported by fishermen who experienced dermatitis and asthma-like symptoms. Generally fish avoid areas affected by L. majuscula and find waters that are not affected. This may reduce the available catch for the fishing industry and recreational fishermen.

majuscula can also smother seagrass, coral and other habitats. Significant blooms may be associated with reduced reproductive success in sea turtles. This may be due to a food shortage as turtles avoid the seagrass beds affected by the cyanobacteria.

Public Advice: You should not swim or wade in areas where L. majuscula is growing or floating in the water. Avoid direct contact with material washed onto the beach.

If you are showing any symptoms associated with L. majuscula or have come in contact with it, see your doctor. If you see what looks like an oil or paint spill on a beach between the months of August and December it is very likely that it is a bloom of Trichodesmium spp. This algae is generally not harmful but can look unsightly and produce a putrid ‘fishy’ odour.

Habitat: Occurs naturally in tropical and subtropical ocean waters. Can bloom any time of the year but most commonly in Queensland between August and December when increased temperatures, sunlight and other environmental factors are favourable to growth.

Identification: Initially appears as little brown bundles of threads which are just visible to the naked eye. Large, old and beached slicks may have a putrid ‘fishy’ odour as it decomposes and may be rusty brown with grey, green or purple streaks. Trichodesmium spp. blooms often resemble oil spills, however, unlike oil if a stick is dipped into a Trichodesmium spp. bloom the material will not adhere to the stick. Further, when a stick is removed from oil, a hole will remain in the oil from the stick while it will immediately close if the material is Trichodesmium spp.

Problems: Trichodesmium spp. plays an important role in the marine food chain but large blooms may occasionally present problems. The most serious problem is depleting the oxygen content of the water in restricted areas and this can result in fish kills. Other impacts are aesthetic and can include a strong putrid, ‘fishy’ odour. This may superficially look like spilled paint or oil.

Public Advice: Blooms of Trichodesmium spp. will generally disappear within a few days. If you come in contact with a bloom it can easily be washed off with running water. For extremely large blooms on recreational beaches and seashores the local council may commence mitigation activities.

To report an algal bloom that has washed into recreational waters, bathing reserves or foreshores contact your local council. If the bloom is a harmful algae the local council may erect signage and commence mitigation activities.