The term Forgotten Australians was first coined in 2004 by the Australian Government’s Senate Standing Committee on Community Affairs to refer to people who experienced institutional or out-of-home care in Australia during the 20th Century. The Australian Senate used the term when reporting on its 2003-04 Inquiry into Children in Institutional Care.

The Queensland Government was the first in Australia to formally recognise the experiences of Forgotten Australians after the 1998-99 Commission of Inquiry into abuse of children in Queensland institutions, better known as the Forde Inquiry. The Forde Inquiry found many children had suffered abuse or neglect in institutional care and these people continue to be affected by these experiences into their adult life.

In May 2007, in response to the recommendations of the Forde Inquiry, the Queensland Government established the $100 million Redress Scheme to acknowledge the abuse or neglect suffered by children placed in Queensland institutions by providing ex-gratia payments to those who were harmed.

At this time, there is no intention to reopen the Redress Scheme. People who did not lodge an application to the scheme and wish to claim for monetary compensation will need to proceed through the normal legal process.

Many Forgotten Australians are seeking access to records from their time in care and are looking to reconnect with family members. Former residents of Queensland institutions can receive assistance with this process through Lotus Place.

The Queensland Government holds a large number of files and records relating to:

Apply for a copy of these records.

The Find & Connect website brings together historical resources relating to institutional ‘care’ in Australia. You can use it to:

You will not find personal information or private records on Find & Connect.

Establishment of the Forde Foundation was one of the government’s responses to Recommendation 39 of the Forde Inquiry. If you were:

Link-Up (Qld) Aboriginal Corporation supports the healing journeys of Aboriginal and Torres Strait Islander people who have been separated from their families and cultures through forced removal, fostering, adoption and/or institutionalisation. They deliver professional, culturally sensitive and confidential research, reunion and cultural wellbeing services to those over 18 years of age. Find a Link-Up office near you for more information.

Post-adoption services and support are available across NSW and Queensland, offering practical information and advice for life after adoption through counselling, groups and retreats, intermediary services and a library of resources. Find out more about the services available.

CLAN is a support, advocacy, research and training network for people who grew up in Australian orphanages, children’s Homes, foster care and other institutions.

Read the Queensland Apology to those harmed in Queensland Institutions during their childhood.

Read the Queensland Parliament’s apology for past forced adoption practices.

Several memorials have been established to commemorate the experiences of former residents of Queensland institutions: 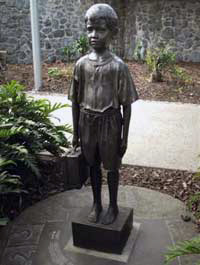 A remembrance statue in Roma Street Forum, Brisbane was established as an initiative of Forgotten Australians.