The 2020 Queensland Greats are:

Using her skills as an author to promote Maryborough, Nancy published a book about Maryborough's Mary Anne, the first steam train to be built in Queensland. Nancy is patron of the Proud Marys, a group which promotes Maryborough as the birthplace of Mary Poppins author P.L. Travers.

Nancy has also been recognised for her efforts in having a memorial of Maryborough war hero Duncan Chapman, built in time for the Anzac Centenary celebrations. After sitting in the stands as a nine-year-old, watching the arena events, in 1992, Angus Lane OAM fulfilled a lifelong dream of becoming the Royal Queensland Show (Ekka) Chief Ring Announcer. The role of the ring announcer is to commentate and educate and from 1992 to 2007, Angus presided over the daytime activities and competition in the main arena at the show. After taking a break in 2008, he returned to the Ekka in 2014.

Angus has supported the Queensland show movement for more than 30 years ensuring the very best in professional announcing is provided wherever he is present. His knowledge of show competitors and exhibitors, particularly in the horse and beef sections is greatly admired and appreciated by the show movement nationally.

In 2013 Angus received an Order of Australia Medal in the Queen’s Birthday Honour’s list for services to agricultural shows. Angus has been involved in many community groups and was named Queensland Father of the Year in 2002. 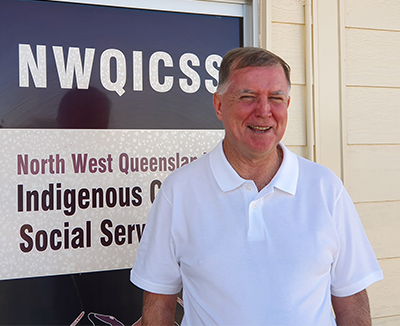 Father Mick Lowcock OAM came to Mount Isa in the early 1990s as Parish Priest and soon became a household name for the way in which he involved himself in the local community.

Through the Catholic Church, Father Mick set about establishing North West Queensland Indigenous Catholic Social Services Limited (NWQICSS) as an organisation which today employs more than 70 people of which more than 80 per cent are Indigenous. The group provides assistance and numerous programs to those in need, mostly Aboriginal people and their families. NWQICSS enjoys a strong community profile and actively engages the community it serves.

In addition, Father Mick assisted in creating the Jangawalla Kitchen which consists mainly of volunteers who provide daily meals to the homeless and people at the local police watch house. Father Mick is a tireless community worker and multicultural advocate for outback Queensland. Following the abduction and murder of their son Daniel in 2003, Bruce and Denise Morcombe committed to making communities a safer place for children. The establishment of the Daniel Morcombe Foundation in 2005 highlighted their goal to educate young people about how to stay safe in physical and online environments and support young victims of crime in their often harrowing journey to recovery.

While some people would have been destroyed by losing a child, Bruce and Denise have embraced the desire to ensure other children don’t suffer Daniel’s fate, that parents and carers are informed and that young people themselves know the signs and what do to do if they find themselves in potentially dangerous situations.

Bruce and Denise’s personal commitment to the safety of children was recognised when they were named joint Queensland Australian of the Year recipients in 2012 and by the Medal of the Order of Australia awarded to them in 2013. They are also Child Safety Ambassadors, and through the foundation have delivered important safety education to Queensland and the nation. 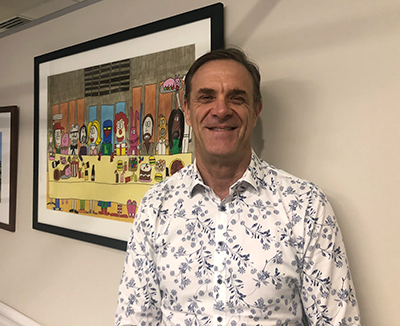 Dr James Morton AM is an accredited specialist in Haematology-Oncology, Medical Director at Icon Cancer Care and Senior Specialist in Leukaemia and Bone Marrow Transplant Services at the Royal Brisbane and Women’s Hospital.

Above all, he is a passionate advocate for children with Autism Spectrum Disorders (ASDs) and is the Founder and previous Chair of the AEIOU Foundation for children with autism, a not-for-profit organisation. His vision is to see every young child with ASDs in Australia able to access high quality, evidence-based early intervention.

Dr Morton was a Board Member at the Leukaemia Foundation of Queensland from 2000–2008, where he created and initiated the World’s Greatest Shave campaign, which continues as a successful fundraising initiative to this day. Dr Morton was awarded a Member of the Order of Australia in 2015, in recognition of his services to both children with autism and in oncology.

Betty Taylor has actively worked to prevent violence against women for almost 30 years, having held a number of positions, including Founding Manager of the Gold Coast Domestic Violence Prevention Centre; forming the Tavan Institute; and being an independent mediator to women being sent to Wolston Park Asylum from the 1950s to 1980s. Betty has contributed to education and training in domestic violence responses through publishing papers and training manuals and a media kit to assist journalists reporting domestic violence.

In 2004, Betty returned from a Churchill Fellowship study tour of the United States where she researched domestic violence death review boards. She played a key role in the formation of the Domestic Violence Death Review Action Group in Queensland and in petitioning the government for the establishment of the Domestic Violence Death Review Board, which she has been a member of since July 2016. PCYC Queensland is a registered charity providing youth and community programs, services and facilities. Working alongside the Queensland Police Service since 1948, the organisation’s vision is building safer, healthier communities through youth development. 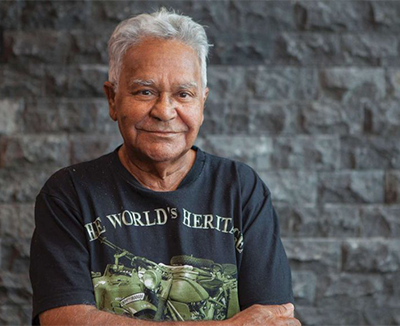 Born in Cunnamulla, Richard (Darby) McCarthy OAM went on to become one of the nation’s best jockeys during the 1950s and 1960s, riding more than 1000 winners in Australia, Asia and Europe.

In 1984 he began a new life as a trainer and set up a training centre at Toowoomba’s racecourse. In 1990 he was once again re-licenced as a jockey until he retired from racing in 1991. Most riding and Aboriginal sports histories concluded that it was not until the 1960s with the phenomenal success of Darby McCarthy that the barriers for Aboriginal riders were broken.

Confirmation of his strength of character is that Darby achieved such a successful and lengthy racing career in the face of so many challenging and difficult circumstances. Given his professional riding record across Australia and his achievements in racing as a jockey, his ability was extraordinary.

Darby set up an apprenticeship scheme in Toowoomba in 1984 where he would take in and teach young Aboriginal kids the art of horsemanship. He was a member of the University of Southern Queensland, Elders and Valued Persons Advisory Board (EVPAB) that provides high-level strategic advice to the Vice-Chancellor and an elder of the Toowoomba Murri Court.